Blog > Rise of the Bald Cats: The Strange and Beautiful

We love spending time with Lilo, stroking her head, her smooth fur, brushing our fingers through. Nothing like a fluffy cat right?

Have you seen the cats though, whose fur can’t be stroked… because they don’t actually have any? Yes, the ones with little or no hair. These cats with smooth, hairless heads may seem stranger than fiction and they often pique our curiosity. I thought we’ll talk a little about these strangely beautiful bald cats.

These cats live in the shadow of their more famous kin and often creep out some or are ignored by others. They are called mole cats (after mole rats). These cats are biological entities and biologists just love classification, so here we go.

These cats broadly occupy 6 breeds whose names are as strange as the cats themselves! 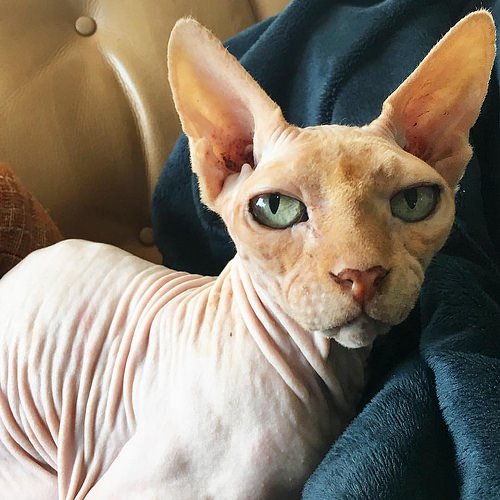 The most famous is the Sphynx cat. The Sphynx cat has been formed from selective breeding in the 1960s. It is not hairless but lacks colour. Its skin texture is like a European mountain goat and it shows all markings shown by usual cats (tabbie, tortie etc). Their lack of fur is owing to a natural mutation. They tend to be extroverts and show a very dog like affectionate behaviour which has led to their fame. 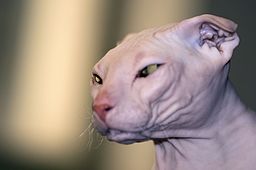 By Nickolas Titkov, distributed under a CC BY-SA 2.0 license

The Ukrainian Levkoy is a man-made breed created quite recently (2000-2001s). It was created by an artificial genetic crossover. The hairlessness is owing to a dominant gene and they are usually identified by their droopy ears.

Elena Biriukova was the creator of this breed. Ukranian Levkoys are affable, friendly and sociable. They socialize even with other pets like Pigs, dogs other cats etc. They are kind of a cross between cats with ears that fold over and a Sphynx.

By Peterbald (en wikipedia), distributed under a CC BY-SA 2.0 license

The Peterbald is a breed resembling oriental shorthairs. They were created as a result of experimental mating. They have a recessive gene for hairlessness and they are born with varying amount of hair. Some are completely hairless while others have a straight coat.

Those born with hair are known to shed their hair over time. They come in all colors. They have webbed claws which enable them to open doorknobs. Their long tail that resemble a rat’s is one of their distinctive features.

The Lykoi is a breed whose appearance and name is in stark contrast with their nature. They are mostly hairless especially in the facial region giving them a Werewolf like appearance but they are very friendly and intelligent creatures. They are popularly known as Werewolf cats. The
Lykois sprung up naturally and many experimental breeding procedures are being carried on, on them. 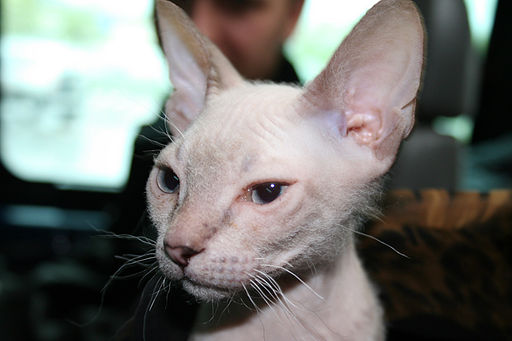 Donskoy is a Russian breed created by cat breeder Elena Kovaleva. Though it is confused with the Sphynx, they are not related. The donskoy hairlessness is owing to a recessive gene unlike the Sphynx.

The breed started in 1987 and has been in a bit of controversy since then. Many scientists have expressed concerns on their Genetic Health and have also suggested that there is a causal relationship between the dominant hairlessness gene and a few cat diseases.

Lastly we have the Bambino, a cute little breed which appeared in 2005 and has secured a place in cat lovers’ heart quite soon. These cats are very small in stature making them appear like kittens. They are also hairless. They are very affectionate and love to be cuddled. They are comfortable with other pets and are adaptive of their surroundings.

What You Need To Know:

You might expect that since they are hairless, they might have come originally from the Mediterranean or tropical regions but no. These cats are mostly from regions having terrifyingly cold winters along with plenty of snowfall.

So how do they survive? Well, they were created by human intervention and almost always live with humans. They are not equipped for the cold since they lose heat faster than normal cats.

So they are even warmer than usual cats. Remember that, the next time you want to snuggle with a pet. Fact: They are nearly 4 degrees warmer.

More Popular Than You Think

These cats might not be your cup of tea and some people even call them ‘freaks of nature’. However, they’re definitely more loved and popular than you realize! According to the Cat Registration statistics in America, these breeds actually rank number 8 of the most popular felines.

Are They Truly Hairless?

Though these cats are referred to as bald, they are not. Talk about not judging a book by its cover. They actually do have a thin layer of hair. They should be better named as Short Haired Cats but that is hardly catchy.

The length of hair varies from breed to breed. Their hair is more fuzzy than furry or fluffy and almost resemble suede.

They’re Just as Colorful and Interesting

They are colorful in their own ways, just like your normal cat. They mostly have all skin pigments that normal felines do and they also show a wide variety of colors and patterns. You will find solid, point, van, tabbie and tortie among these cats too.

You would think these naked cats don’t get dirty. The exact opposite is true. They have no fur to absorb oils and so almost everything sticks to them. They end up getting dirtier than usual cats.

They have to be given a weekly bath – pet owners recommend using medicated shampoo meant for pets. They don’t usually like to get wet but try to reward them to build some positive reinforcements.

Also, lack of long hair means they are open to the elements. They can get sunburnt and have a sun stroke or get too cold. They are supposed to be indoor cats but the Bambino are known to adapt quickly.

Judging a book by its cover definitely gets us nowhere. Although they can look cold and unwelcoming, they are actually very friendly. The Sphynx breed was even recognised as the most affectionate by the Journal of Veterinary Behavior.

If you’re relieved that it has no hair because you’re allergic, then you’ll be disappointed! They still have short hair and all the chemicals which cause usual allergies related to cats.

Furthermore, their lack of a coat makes their secretions easier to spread. The Sphynx still produces a certain protein in their saliva and skin that might make your eyes get itchy!

Skinny Cats, do they eat anything? Well, they eat and they eat a lot. Their Basal Metabolic rate being higher than normal cats, they burn up energy at a tremendous rate so they have to feed frequently.

Again, the lack of a coat exposes their skin to a lot. While they can go outside, they are mostly more suitable to stay indoors. They are sensitive to the cold or the heat and to the scorching sun as well.

These cats look creepy. But they are loved a lot and they reciprocate more love than they take. They are also very intelligent and quite crafty. Some of their breeds can do wonders with their paws while some will make you happy with just their cuteness. They may not have hair but these bald cats have a roomful of love.