Blog > Can Cats Share A Litter Box? Multi Cat Solutions: The Debate For and Against!

Simply put, it’s not a very good idea. It’s a lot more comfortable for your cats to have their own cat litter boxes plus auxiliary extras, and it could save you some hassle in the long run. Cats are typically too territorial to share, so it’s better for them that they don’t share one litter box. It should be one litter box per cat. Can two cats share a litter box?

Are self cleaning litter boxes worth it? 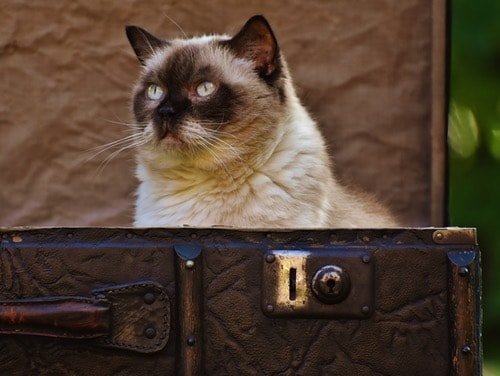 Cats like a bit of privacy. Even amongst siblings from the same cat litter, cats need a great deal of alone time to do their own thing, one box per cat. This being the case, answering nature’s call can be unsettling if you have to share a cat litter box.

Also, as all cat owners know: cats are very possessive. They are quite obsessive creatures of habit. As such, they will often trademark their favorite travel paths (portable litter box)

throughout the house. Any interruption could provoke hostility.

Know that if a less dominant cat is insolent enough to trespass on what the alpha considers to be their litter box, the alpha will in some cases bully the other cat pet away. Sharing a litter box is stressful enough, but not using a safe pee place at all will be very bad for both your health and your pets health. Extra large litter box for big cats

Even if your cats are willing to share, you will find that keeping the litter box clean will be an irritating and frequent job. Cats need a nice clean space to do their business and it’s better for their health. If more than one cat is using the same litter box, a lot of poo will quickly accumulate. If they can’t find somewhere comfortable in the cat litter box to go to the loo, they will find somewhere outside it (i.e. your carpets, furniture or nearest pot plant.)

The Cat to Litter Box Ratio: The Golden Rule

Such a consideration will allow each cat to claim their own toilet, while having one extra box just in case.

You might find and know that at first your cats are all quite polite and don’t mind sharing. However, there is a chance that someone will kick up a fuss at some point.

If you don’t have a spare and think things are going fine, that’s a bonus. But there are a few pointers which could indicate that your cat pet is looking to take his business elsewhere (which I’m sure you’ll want to avoid.)

In order to deter other cats from their favorite toilet spot, the greedier of the bunch might start to spray the entry or surrounding location of the litter boxes. This behavior is more applicable to cats with covered litter boxes, but not necessarily constricted to them.

Otherwise, they might begin to leave their droppings uncovered. Some cats don’t get into this habit, but for those who do and then stop all of a sudden, they are likely trying to make a point to their housemates to not use their litter box.

The more grievous cats might not deign to fend off their similarly put-out feline brethren, and go straight for dirty protests around your living space. In order to avoid such inconveniences, just get the extra litter box.

What Size Cat Litter Box Should I Get?

Where Should I Put Each Box? Can I Put Two Litter Boxes Next To Each Other?

Make sure that the boxes are well separated to exclude territorial misgivings. If you have two cats, for example, put one each in suitable rooms in your home which are furthest away from each other and find a good place somewhere in your house roughly halfway between them.

It’s pretty straightforward to find a great place for them; so long as the location is generally keep clean, accessible and away from food bowls and water dishes. Ideally it would also be a quiet, secluded spot where your cat could go to the toilet in peace.

Pros and Cons of Multiple Cats Sharing a Litterbox

No matter how much you love your cats, litter box maintenance will never be enjoyable. Though you might prefer to give your cats’ litter box as little thought as possible, taking the time to make plans before you bring home your new kitten will save you a lot of trouble down the line.

Likely the main reason someone decides to only have one litter box for multiple cats is that their home lacks space for a second one. Considering the fact that most common people do not need to have their cat’s litter box out on display, and most common homes do not have many private, hidden-away spots, this is actually quite a common problem. So technically a pro for why you would choose to have just one litter box for multiple cats is that a singular litter box will most likely take up less space than many litter boxes.

Next, though having multiple litter boxes will cost you more upfront when it comes time to buy litter, it won’t actually end up costing you anymore in litter in the long run. That being said, although litter will cost the same, there is a chance the litter box/boxes themselves may be more expensive. Since cats will likely have trouble sharing a small litter box which won’t give your cat the privacy it need and next can get dirty quickly, the best solution for multiple cats in multiple litter boxes or a larger litter box. Both of these options will end up costing you more upfront.

Cats bathe themselves and kick litter to cover up their waste, cats are clean animals, so it is really no surprise that cats prefer to keep clean box. Unless you are home all day, there is a very good chance that with two or multiple cats share one litter box, it will get dirty very quickly. What this will probably mean is, your cat will feel less inclined to use their litter box, and therefore have to look for other spots to go to the “toilet.” Although having to clean and keep two litter boxes (or more) might be a pain, cleaning smelly cat urine off a carpet is definitely so much worse.

Though many people probably associate the word “territorial” with a dog, cats can often be just as territorial as a dog, if not more. Unlike a dog who may have a whole backyard to themselves, an indoor cat really only has one private spot, their litter box. However, when two or multiple cats are forced to share a litter box that sense of privacy will be taken away, which might make your cat defensive and prone to territorial issues. This will most likely be the case if you get two new cats at once, and will most certainly be the common case if you already have a cat with an established private litter box and you introduce a new cat into the picture.

Overall, you should try and avoid your cats getting territorial issues at all costs, (whether that means getting use different litter boxes or taking away your first cat’s original box so they aren’t defensive) since one cat or more territorial felines can lead to some pretty bad catfights. These catfights can be especially bad if you have an older cat and a young kitten better not try. No matter what your situation is, one of your cats will likely be more dominant than the other, which will probably cause some serious rifts between your cats and anxiety for the more submissive one, which will affect them for years to come.

In this case, the negatives seem to outweigh the positives. Although having different litter boxes may put inconvenience for those with small spaces or tight budgets, it really is worth it to look for a way to make it work to save yourself many headaches in the future.

Having multiple litter boxes per cat really doesn’t need any extra cleaning since if you only had one litter box for multiple cats you would have to keep clean it far more often and more thoroughly to make sure your cats will be willing to use it. Overall, to answer the question, can different cats share a cat litter box, well technically, but it would be best to avoid that at all costs.

Getting My Cats to Share? Can Two Cats Get Along?

It should be obvious by now that your number of litter boxes should have at least plus one extra litter box over the amount of cats in your house. Some of the time, a cat can still have reservations about sharing his house with an impostor. What then?

Firstly, any behavioral problems can be linked to health issues, so a trip to the vet would be a great idea. Once you have the all clear, you can go about working out the health issue between yourselves.

It might just be that your cat doesn’t like the positioning of her litter box. Try shifting them about to see if she’ll take to other places. It is important to look for a discreet, peaceful places to put it in.

If this fails it is time to re-toilet-train your pet. You will have to separate your troublemaker from the others by way of a safe room in your home, where you will place their food, water, litter box, bed and a scratching post. Beforehand, the room in your home will need to be cleansed of any previous protests with an enzymatic pet mess cleaner.

Keep litter from sticking to box

Once it is all set up, lock her up for a few days or so, making sure to visit her regularly so that she doesn’t get lonely. It might be hard to lock your cat away, but stay strong until you can make sure of routine use of the litter box. Then, you can reacquaint the mischief-maker to her adversary and see if the issue is resolved for good.

Can cats share a litter box? Even if it seems to be going fine sharing, it is always more beneficial to stick to the golden rule for litter boxes – always have at least one per cat and extras on top of that.

Check out my Top Pick Here!

If you are on the verge of pulling out your…