Blog > Can Dogs Get Salmonella? What You Should Know

Even the word sounds awful – ‘Salmonella’. It’s the very reason you’ve been double checking meat and eggs your whole adult life and throwing out anything that looks even a bit suspicious. And you very well know how you should take good care of yourself and carefully choose what you drink and eat, but did it ever cross your mind that you should be as cautious when it comes to your pet?

Also Read: How to treat your dog’s upset stomach?

It’s logical, dogs that eat the same food as their owners, are facing the same risk of developing a salmonella infection that their owner faces. But how often does it actually happen, how does it look like and most importantly – how do you treat it once it happens?

Also Read: The dog food brands to go for and the ones to avoid! 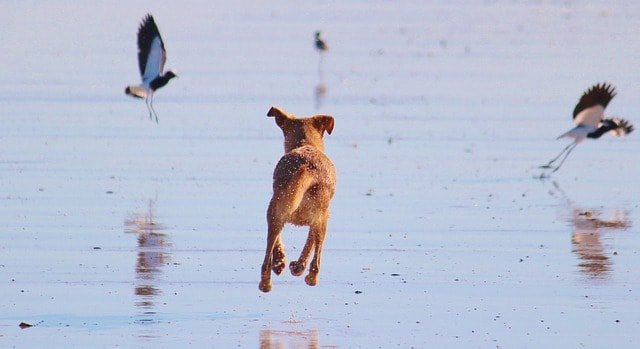 What is Salmonella Infection?

As you probably already know and remember from your high-school biology classes, the simplest definition is that salmonella infection is a bacterial disease of the intestinal tract. Even better, it’s a group of bacteria that causes typhoid fever (an awful acute illness), food poisoning, gastroenteritis, enteric fever and other illnesses. The usual ways that people would get infected is through drinking contaminated water or by eating bad food (especially meat, poultry and eggs).

Salmonellosis infects an estimated 1.4 million Americans per year, and makes for almost half of all bacterial infections in the US. One way of preventing the spread of the disease is by regularly washing your hands.

Causes of Salmonella Infection in Dogs

Long before people started buying nicely packed dog food from the supermarket for their companion, dogs would only live on raw food that they’d hunt in the wild. Logically, since the species did now die out, it means the raw diet fit them.

Salmonella is part of the natural flora of a dog’s system. Roughly 36% of all dogs carry a sub-clinical presence of salmonella which is not enough to cause sickness. Dogs with compromised immune systems might be at risk of getting ill, but this is very rare, it’s very uncommon for dogs to become ill from salmonella.

But when it does happen, it’s usually that the organism is transmitted through contaminated food or through the feces or saliva of an infected animal or human. Usually, dogs contract the disease through food, like eggs pet food or un-refrigerated wet food, but raw chicken is particularly dangerous. Dogs that are already infected can spread further the bacteria through their feces and/or saliva.

Can you give dogs Gatorade?

Dogs that eat trash or dead animals are at high risk, especially if they eat birds, since they often are the carrier of salmonella bacteria.

Usually, it would take something between 6 and 72 hours for food poisoning to appear after infection. And when it comes to dogs, the first symptom you’d notice is a high fever. The fever is oftentimes accompanied by vomiting and diarrhea. But also, infected dogs might show signs of depression and not show any will for food and eating. The big risk they face because of getting diarrhea and vomiting is that they might get severely dehydrated.

Of course, the very first thing to do is to contact your vet, while keeping your dog away from other animals and people. In order to sterilize the areas that you doubt can be contaminated by your dog, use one part bleach in 10 parts water.

The good news is that most of the mild cases can be actually treated at home. The most crucial part of taking care of your dog at those times is that you make sure it stays hydrated by providing clean, fresh water constantly, since it’s been losing a lot of fluid through vomiting and diarrhea. Sometimes, depending of the gravity of the situation, your vet might also prescribe some antibiotics, while in the most serious of scenarios – your dog might have to be hospitalized.

Extremely dehydrated dogs might have to receive a IV fluid therapy while hospitalized, and the ones that got a blood infection or sepsis, might need some plasma or blood transfusion. The situation might actually be the very worst for those that developed sepsis. But, don’t worry, in the majority of cases, dogs recover fully from the infection.

Even though dogs used to eat a lot of raw meat in the past, I don’t think it’s worth risking it. One way to prevent your pet from getting infected with salmonella is by cooking the meat, and bones and eggs for that matter, before giving them to your dog. Also, do not forget the importance of refrigerating meat, this way you’re minimizing the chances even further. When it comes to preparing eggs, a good rule to follow is that you should boil eggs for at least 7 mins.

I guess it goes without saying that you shouldn’t allow your dog to eat from the trash can and/or dead animals. As I earlier said – especially birds, those are the worst, most common carriers.

You might believe that feeding your dog with raw food is doing it well and taking it back to the more natural times, but keep in mind that as small as chances are, they’re still there. Keep good care for your dog and minimize the risk of it developing a salmonella infection.