The least worrisome cause of cats throwing up brown liquid is their food. If it is because of their food, you should notice fairly soon after your cat eats. If your cat keeps eating the same food for a while without any issues, it’s not likely this is the case. However, cat food does often have some coloring in it, and most cat food has a brownish color.

It could indicate that your cat has eaten too quickly and upset their stomach, or that a new food isn’t agreeing with them. It’s important to note that this isn’t a frequent cause of brown vomit. 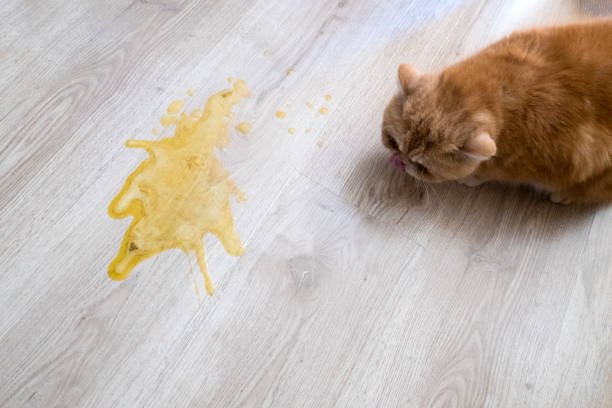 Cats can throw up bile, and the bile isn’t always the same color. However, brown bile is a bit more concerning. Typically, if cats throw up bile, it’s more yellow brown in color. Brown bile is often a sign of more serious internal issues, because it’s most likely coming from your cat’s liver.

Brown liquid vomit can be a sign of bleeding, especially if your cat already has gastrointestinal issues (whether you’re aware of it or not). You can get an indication of whether the bleeding comes from the G.I. tract based on whether or not your cat is a ‘pukey’ kind of cat.

If your cat doesn’t often vomit, but suddenly starts vomiting brown liquids, it’s likely from a gastrointestinal problem. This can be from irritation, something blocking them up, eating something harmful, and more.

In general, brown liquid vomit is not normal for cats. No matter the cause, it does indicate health issues that you should take seriously. While gastrointestinal issues and bile may be more common causes, they’re far from the only ones. A cat throwing up brown liquid can also indicate internal bleeding from another source.

It can also indicate ulcers and constipation. One of the most dreaded causes of brown liquid vomit can also be feline stomach cancer.

Cats can inevitably ingest some things they should. For example, if a cat eats a small trinket on accident. These items aren’t meant to be digested, and can block up the intestines. Over time, this blockage can become more severe if it isn’t cleared. This can lead to a fecal build up in the intestines, intestinal inflammation, and wounds or trauma to the tissues in their digestive system.

Another harmful thing cats can consume (which unfortunately also plays to their predatory instincts) is small animals, and especially rodents. While these may not block up your cat’s intestines, they can cause harm in other ways.

If your cat consumes a critter that has also previously consumed a toxin, this toxin is transferred to your cat, which can also cause bleeding. Perhaps the most relevant example is that of a cat that eats a mouse or rat, which has in turn, first eaten some sort of rodent poison.

What To Do if My Cat is Vomiting Brown Liquid?

Should you call your vet when your cat pukes brown vomit?

Absolutely. Even if you notice your cat eating abnormally fast, don’t assume that’s the cause. Your vet will want to run a variety of tests to determine the cause. Make sure you inform your vet of any additional symptoms if you notice them in your cat (loss of appetite, frequent vomiting or diarrhea, fatigue, changes in behavior, etc).

Your vet will run extensive tests until they can determine the cause of your cat vomiting brown liquid, which may even include x-rays if needed. Then, your vet will direct you to the best course of action. 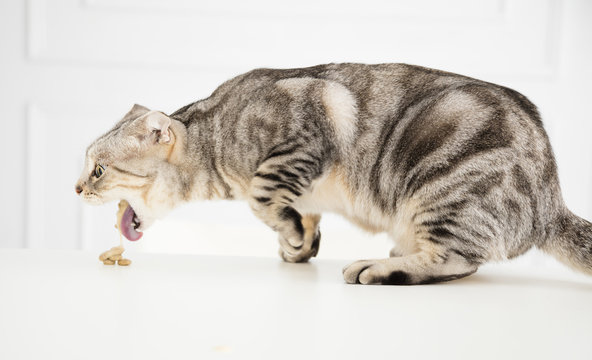 As you might assume, fresh blood is red in color. However, as blood ‘ages’ it darkens to a more brown color. Because brown vomit (if it contains blood) will come from within your cat’s internal organs, it will also take longer to reach your cat’s esophagus and be vomited out.

While cat brown vomit can be brown bile, it’s far more likely that the brown vomit contains blood. If you notice bright red blood, the cause is more likely an abrasion or injury closer to your cat’s mouth and throat.

Take a look at this color chart since the color of your cat’s vomit can tell you more:

Red: Possible gum disease, cancer of the stomach or ulcers

Bear in mind that these are just possible reasons. The last thing you should do is try to diagnose your cat or kitten on your own and start panicking! So I’d always recommend that you take your cat in for a vet check. Your vet will run the right tests to find out exactly what’s wrong. Especially it’s your diabetic cat throwing up brown liquid, please take it to the vet right away!