Your chihuahua is such a little thing—but don’t let that fool you! As cute as chihuahuas are and as loving as they can be, these little guys have strong personalities, and yes, they can bite in certain situations.

Chihuahuas can especially get aggressive because of being protective of their owners, so if they think you’re in danger, can they actually cause some serious damage? How is the bite of a chihuahua? Has a chihuahua ever killed someone?

Why is your chihuahua shaking?

Chihuahua with tongue sticking out

Some references claim that a chihuahua bite force in pounds is 3,900 PSI (Pounds Per Square Inch) This is seriously strong for such a tiny animal, and in reality, nothing actually backs up this widespread rumor. Keep reading and find out what the chihuahua bite force pressure actually is.

For some context here: a lion is measured as having a bite strength of around 600 PSI. And there is absolutely no way that your tiny chihuahua will be able to bite with 6 times the strength of a lion. It is unthinkable that chihuahua’s bite force would be stronger.

Actually, the bite strength of dogs is often reported incorrectly since people mix up units of measure. The size and shape of the skull are what should be recently measured, along with the shape of the jaw.

Most owners, therefore, believe that the actual strength of your chihuahua’s bite is around 100-180 PSI. Of course, it’s not accurately measured, and we can never know exactly how hard chihuahua bite force strength is because we can never instruct a chihuahua to just bite down as hard as it can, but this is the closest estimate we have to understand the maximum force. 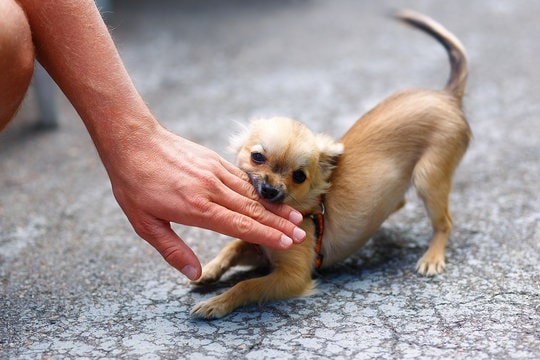 How Strong is a Chihuahua Bite: Too Dangerous and High?

So, why is that 3,900 PSI too high again? Putting aside the fact that there’s no way your chihuahua’s jaw is somehow stronger than a lion’s jaw, you already know that the size and shape of the chihuahua’s head and jaw help to determine their dog bite force.

Let’s look at a few more comparisons too. Look up the Kangal dog breed online—they have the strongest bite out of any dog breed at 743 PSI. When you think about the Pit Bull, too, many people tend to fear this Pit Bull breed because of how strong they are also considering their jaw, and they are also known as being a common cause of human fatalities. But they only have a bite as strong as 235 PSI.

There are many other dog breeds that are much stronger than the Pit Bull even—they don’t even make the top 10 list, and the chihuahua isn’t there. English Mastiff has a high measure dog bite strength of 552 pounds-just shy of the bite strength the lion has, and it is perhaps not surprising due to their bite, the wider the jaw and the larger the dog, the higher it is. Also, dogs like the American Bandogge, Cane Corso, Dogo Argentino, and Wolfdog are much higher in terms of PSI, clocking in at around 400 and 800 PSI (Pounds Per Square Inch)

So, realistically: no, the chihuahua doesn’t have a force that’s so insanely high pressure in pounds per square inch. Fatal chihuahua attacks are certainly not common!

There’s a reason why people tend to think chihuahuas were the most aggressive dog. Chihuahua actually bite vets more than any other breed and rank 4th in the breeds that have bitten children. Dog owners have a good reason to think they’re a little aggressive then, and chihuahua owners do report that they might lash out when confronted by a larger dog.

The chihuahua may be small with small heads and jaws, but it’s certainly not willing to back down from anything larger than it! This doesn’t mean that they’re explicitly aggressive, though, just that they do have a tendency to bite, which might happen for any reason, like being afraid or nervous.

So, you know that the chihuahua can bite and lash out and that people do tend to think that they’re a little bit aggressive. Are these tiny pooches legitimately dangerous, though?

Well, any dog can be dangerous, regardless of size. Yes, even small dog bite force can be high as well. Even if the chihuahua doesn’t have the highest number dog bite psi compared to other dogs, chihuahuas are intelligent, fast, and light on their feet. Some of their bigger teeth can be an entire inch long, and when combined with at least around 100 pounds of pressure, they can still cause some damage. Chihuahuas might even bite off a finger or at least tear some clothing.

There are even recorded fatalities caused by chihuahuas, but please take this fatality with a grain of salt. There are only a few cases of this in the past 10 years, and most often, any biting they do isn’t going to be that extreme fatality, according to chihuahua bite statistics and the annual fatalities. Quite frankly, this level of danger doesn’t even match up to that of other larger dog breeds at all. There was indeed a case of a chihuahua killing someone before (2 human deaths were recorded in the US between the years of 2005 and 2018). But bear in mind that pitbulls were involved in the 2018 case and there was no concrete evidence that the chihuahua was actually the main culprit since there were no witnesses.

Chihuahuas are great pets and companions. Many owners confirm how loyal they are and that while they are opinionated little things, they aren’t usually aggressive. For the most part, the only time your chihuahua might be dangerous is if they’re scared or if your chihuahuas aren’t spayed or neutered. 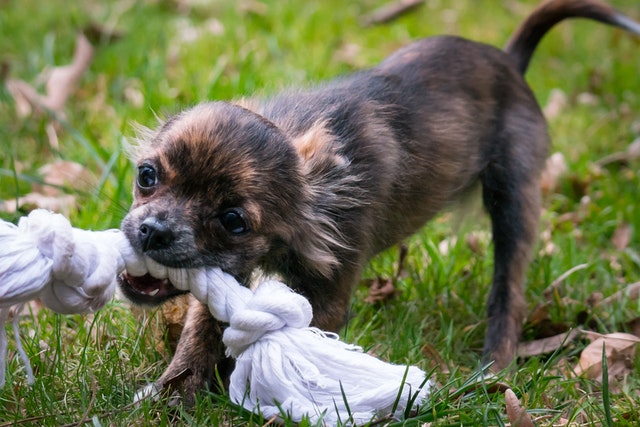 How to Stop Your Chihuahua’s Aggression

You love your little chihuahua, and you don’t want them to become aggressive. There are a few things you can do to help your chihuahuas out then.

First off, have your chihuahua spayed or neutered as early as possible. Any dog breed can become aggressive or behave strangely when they go into heat—especially males that are looking for a female to mate with. If you have your chihuahuas spayed or neutered, you can help prevent this type of behavior. Plus, you can actually increase their lifespan and lower their risk of cancer too.

You can also just spend more time with them. Chihuahuas like to be the center of your attention, which is why they work best with people who can be at home for a good amount of time. If you leave your chihuahua alone for too long, this is when they might decide to tear up your furniture and be aggressive.

Socialize your chihuahua too! Let them get used to lots of daily activities from the time when they’re a puppy—take them outside, associate them with other dogs and with other people while you can. Getting chihuahuas used to being social with others so that they don’t get aggressive with lots of dogs or people as they age.

Should You Worry About Your Chihuahua’s Bite?

Realistically, no, you don’t need to worry about your chihuahua displaying an incredible amount of aggression towards you, as long as you spend the time with them to socialize them with others and work to train them.

Chihuahuas do have a strong dog bite, though, considering their small size. Not to mention some seriously sharp teeth that’s one factor for their bite. This is why many people tend to think that chihuahuas must have such a strong bite, but in reality, they clock in at around 100 PSI bite instead and are certainly not biting at people with the force of a lion bite or of any large breed of dog bite.

If you’re still a little scared, don’t worry! Your chihuahua isn’t going to find you, hunt you down, and tear you apart. Chihuahuas might bite if they aren’t trained well, and you still might get a nasty bite, but you won’t end up with damage like you might get when confronted with a larger breed.

For those of you that have a chihuahua, take the time to train them properly so that you know that they won’t be any sort of a danger to others and that your chihuahua can interact well with other dogs and people. Be sure to spay or neuter them too, and if you are noticing any strange aggression that your chihuahuas weren’t displaying before, always talk to your vet to be sure that there are no underlying problems.