Chihuahuas can be the perfect small dog for some people. They’re travel sized and adorable lap dogs even if they do get a bad rep sometimes. While chihuahuas are known for their large eyes and pointy ears, some chihuahuas have floppy ears. For those who didn’t know this beforehand, though, it can be a bit of a surprise.

How strong is a chihuahua’s bite force?

Why do chihuahuas shake?

Why Your Chihuahua Has Floppy Ears

There are numerous reasons why your chihuahua may have floppy ears, but most of them are not within your control. Often it depends on genetics and age, though some reasons such as diet and anxiety levels can affect your chihuahua’s ears too.

There may be more than one reason why your chihuahua has floppy ears, so don’t assume that it’s only their diet or their age that is affecting their ears. Their ears may be floppy for another reason and sometimes it’s out of your control.

Here’s a list of reasons why you’re chihuahua may have floppy ears: 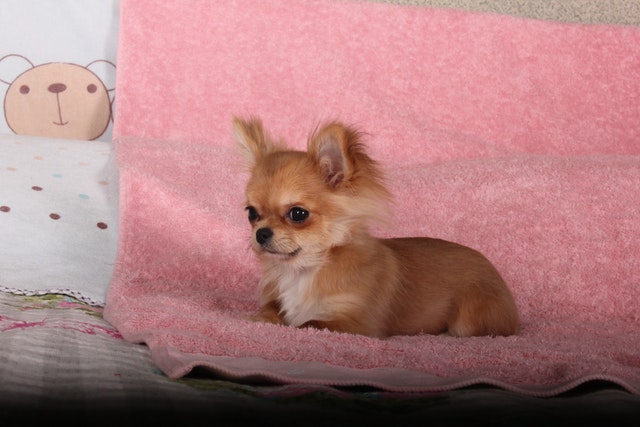 Just like all puppies, chihuahuas are born with their ears closed. Over time, their ears will stiffen and become pointy, so don’t be surprised if your puppy has floppy ears. It’s entirely normal for newborn chihuahuas to have limp, floppy ears.

When they’re newborns, floppy ears are caused by a lack of muscle. Their ears haven’t had the time to stiffen and develop the muscles necessary to hold up their ears. It will take time before these muscles start to develop and even then, their ears may stay floppy even while they’re still growing.

Some chihuahua puppies will have floppy ears even at 10 weeks old. This is usually when the development process will begin, though, so you can expect their ears to start perking up. This process can last up to six months, so if your chihuahua still has floppy ears after six months, then the cause may lie somewhere else. 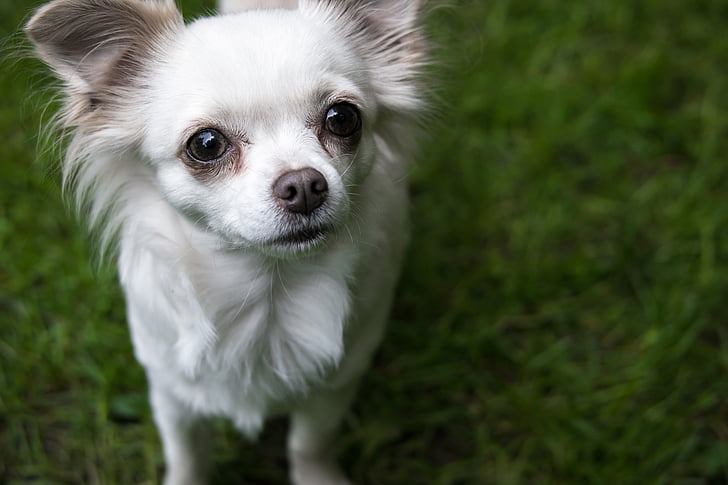 Did you know that chihuahuas lose their baby teeth? Between about four months old and six months old, chihuahuas will go through a teething phase. Surprisingly, this process can have an effect on how floppy or pointy a chihuahua’s ears are.

It’s possible that your chihuahua will have pointy ears before the teething phase only for their ears to become floppy when they start teething. Don’t worry, though. If this is the case, then more often than not, their ears will perk back up once their teeth have come in.

Why does teething affect their ears, though? While chihuahuas are teething, they chew a lot. Just like human babies, chewing helps ease the teething process. However, chewing so much means that the muscles in their jaws are working overtime. The muscles around both the jaw and their ears will weaken during this time, so their ears are no longer able to hold themselves up.

Maybe your breeder swore up and down that your puppy was 100% chihuahua, but if their ears don’t stand up, it can be a sign that they’re a mix of some sort. While this isn’t necessarily a bad thing, it can make it difficult if you planned on showing your puppy in dog competitions as perky ears are a required trait.

Genetics play a huge role in the perkiness of your chihuahuas ears, believe it or not. Perky ears are an iconic characteristic of chihuahuas and when a puppy has traces of another breed in their genetics, they may not develop pointy ears.

If you’re dead set on having a chihuahua with perky ears, it’s best to look for a breeder that offers a guarantee and can promise their ears will stand. The best breeders will be able to tell you if a puppy’s ears will stand up, though there are some cases where even purebred puppies don’t have perfectly pointed ears.

If your chihuahua is predisposed for floppy ears, then there may not be anything wrong with them. Floppy ears don’t always mean there’s a problem with your puppy. You can talk to the breeder to learn more about your dog’s lineage, though, to determine if it’s possible that your chihuahua may just have genetically floppy ears or if the problem lies elsewhere.

In some cases, breeders may breed their puppies specifically so that they have floppy ears. If this is the case, then they’ll likely tell you ahead of time so you know that you’ll get a floppy-eared puppy.

5. It’s a Trait of Domestication

Through domestication, certain aspects and traits change, even in chihuahuas. As wolves and wild dogs were domesticated, the number of neural crest cells (NCCs) lowered which affects the ear cartilage in dogs.

Before domestication, dogs needed to be alert which meant having strong ear cartilage that could alert them to danger. It helped with their fight or flight instinct but these days, this instinct is less strong and NCCs are lower. Lower NCCs means that a dog’s ears may be a bit floppier as they don’t need the extra cartilage to key them into danger.

Lower NCCs also mean lower adrenaline as the two are directly related. If your chihuahua has floppy ears, it may just be a sign that they have fewer NCCs, have less adrenaline, and are less stressed. While floppy ears may not be viewed as a good thing by some people, no one wants their puppy to feel stressed and anxious all the time.

6. They Have an Unhealthy Diet

Diet can play a role in your chihuahua’s ears. Make sure whatever food you’re giving your chihuahua is full of nutrients that help their joints, skin, and cartilage. Their diet is important even before they’re born which is why you want to make sure your breeder is gently caring of their dogs and feeding their puppies nutritious food.

Some things to avoid are artificial coloring, refined grains, corn, and rice. Some things to look for are fatty acids such as Omega 3 and Omega 6.

Your chihuahua will need about 200 calories per day, so make sure they’re getting this from high quality food sources. Even if your dog’s diet doesn’t change their ears, ensuring they get good nutrition is important for their health and happiness.

If your chihuahua has floppy ears, this isn’t a bad thing! While most chihuahuas do have perky ears that stand straight up, floppy ears don’t always mean there’s a health issue or problem with your puppy. In some cases, it may mean your puppy is less anxious thanks to domestication and genetics.

When it comes to owning chihuahuas with floppy ears, there can be a lot of misinformation about caring for or “fixing” your dog’s ears. To avoid accidentally harming your dog, here are two tips to know about your little floppy-eared friend.

1. Do Not Crop Their Ears

Cropping is done on some dog breeds to make their ears stick up. It involves cutting the outer ear flap and is typically done when the puppies are still little. Terriers, pinschers, great Danes, and Dobermans are just a few breeds where it’s common practice to crop the ears of puppies.

Although ear cropping is legal in the US for some breeds, it’s really harmful and traumatic for your dog. Even when done by a professional, cropping your chihuahua’s ears will be painful and scary for your puppy. If you really want a perky eared chihuahua, it’s best to simply find a breeder who ensures their puppies have perky ears.

Cropping is only done to serve cosmetic purposes and has no health benefits for your chihuahua. However, cropping can have serious consequences. There’s always a risk that the procedure has complications and your dog may get an infection, experience increased sensitivity in the area, or suffer from constant pain. In some cases, their ears may end up needing to be amputated.

2. Care for Their Ears

Every dog breed needs to be cared for and this extends to their ears. Even chihuahuas with perky ears need regular inspections to ensure there isn’t any wax or dirt stuck that could lead to an ear infection. If your chihuahua has floppy ears, though, you’ll need to pay extra attention.

To help prevent ear infections, clean the outside and around your chihuahua’s ears. Never clean the inside of their ear as you may hurt them or damage their eardrum.

Making Your Chihuahua’s Ears Stand Up?

If your chihuahua has floppy ears and you want to make them stand up, it is possible, but it’s strongly discouraged. Unless your puppy is very young, trying to force their ears to stand up can hurt your dog. There’s also no perfect solution or guaranteed method to get your chihuahua’s ears to stand up, so it’s not worth the pain you’ll cause them.

One of the commonly used methods by breeders is taping. When a chihuahua puppy is about six months old, the breeder uses medical tape to wrap the puppy’s ear and force them into an upright position. The two ears are then connected with a piece of tape to help keep them standing up.

The taping process lasts about a week and is meant to help strengthen the muscles in your chihuahua’s ears. This needs to be done when they’re young, though, or the process is less likely to work.

Even when done on young puppies, taping is not a guaranteed method. You or the breeder may arrange the taping at the ideal time and in the perfect position, but you puppy may just be destined to have floppy ears. Instead of getting frustrated and turning to more painful and damaging methods, it’s best to accept your chihuahua as it is. Like people, chihuahuas are happiest when someone isn’t trying to constantly change something about their appearance.

Some people try to give their chihuahuas calcium supplements as calcium is believed to help the cartilage develop and strengthen. Although this method is based solely on theories, many people still try it in an attempt to help their chihuahua’s ears perk up.

Be careful about how much calcium you give your chihuahua as too much can increase their risk of diseases such as hip dysplasia.

One method that is less damaging and more soothing for your chihuahua is an ear massage. Also based solely on theory, the idea surrounding this method is that the massage will increase blood flow to their ears and help encourage cartilage development. Some veterinarians say that massaging your dog’s ears will have the opposite effect, though.

Chihuahuas are very anxious dogs and unfortunately, high stress can cause developmental problems. When you first get your puppy, do your best to reduce stress and anxiety. During the developmental months of your puppy’s life, keeping stress as low as possible can encourage proper development and in turn, increase the chances of your dog having perky ears.

Although chihuahuas are known for their pointy ears, some are just naturally going to have floppy ears. Whether this is caused by their genetics or their environment, it’s not something you can always control. Trying to change your chihuahua to have pointy ears can be stressful for your dog, so if you do find yourself with a floppy eared pet, it’s best to accept them as they are rather than put them through the stress and pain of trying to achieve perfect, perky ears.