The litter box: the greatest point of contention for any cat owner. Cats need them, but they smell, they’re messy, and cats always end up going next to the box instead of inside! Well, my cat did anyway, but there’s a litter box out there for messy guys like him.

An Introduction to the Brand

It is so suitably named, although you might be the clever one if you pick one up. Your smart kitty will adapt to this special litter box quickly no matter the age of your cat. It looks a little like a bin with a hole in the top, but that’s what makes it so inconspicuous.

This box not only provides privacy for your cat, but it also prevents dogs from getting to it, eliminates leakage, and is completely durable. There’s not much else to ask for when it comes to your cat’s needs! The brand itself is made in the USA with good high quality plastic and a lid that comes off easily so you can scoop. If you’re traveling, this box even makes it easy to have a trip without getting litter all over your car! 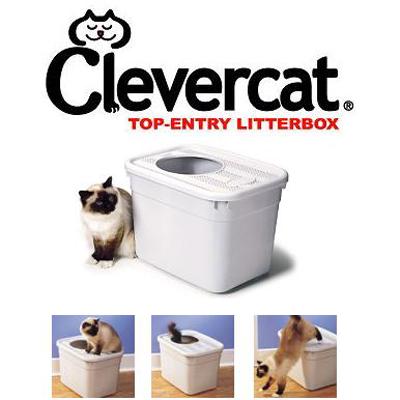 With so many new and innovative types of self cleaning or so-called simple litter boxes out on the market today, I know I can’t be the only one who was a little lost on which one to buy. I was just tired of finding litter all over the ground and I had to pick something. 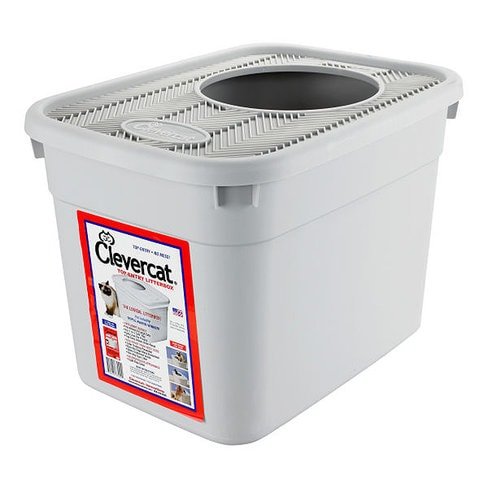 Does this litter box clean up after your cat? Sorry- no. You still have to scoop out the litter, but you don’t need to deal with the smell or sight of litter everywhere. The box is designed to be top entry so your cat can jump right in and out with ease. Thanks to that design, your dog shouldn’t be able to find his way in either.

This box pretty much looks like a Tupperware bin with a hole cut out of the top. In the end, that’s pretty much what it is, but the simple design makes it that much easier for you to figure it out! Way too many cat boxes are filled with complicated parts you need to assemble or clean out, but this one is even easier than a normal litter box. It’s the fact that it’s so easy that helps not only use you it, but helps your cat adjust to it quickly too.

It’s a top entry box, meaning that your cat jumps in from a 9 inch opening above. The space is too small for dogs and when your cat comes back out, they won’t spread litter everywhere thanks to the top lid grate that removes any excess litter from the paws. Liners aren’t specifically necessary either although you should know that so many people speak highly of the Jumbo Liners and I swear by them! The bottom is flat and smooth to help waste removal easy, so save a little money there! If you do use a liner, just pick it up and toss it.

As I searched for the perfect litter box, I scoured the webto make sure I was actually getting a good product. All too often a product is advertised well, but people find so many issues that make me cringe. Luckily for me then, most of the customer impressions for the CleverCat Top Entry box were positive.

People loved it! One woman, Sally, said her two idiosyncratic cats were so strange that she never expected them to take to it. They were jumping in and out in no time. Multiple people even spoke about the unintended side effect of the box: their cat learns how to use the toilet. Matthew said that his cat figured it out pretty fast, although his wife wishes their guy could flush the toilet now.

The number one negative comment was about how people just couldn’t get their cats to use the box. While many cats had no problem with it, Jerry said his cat was against it. Molly even said that one of her cats liked to play “whack-a-mole” with the other while they were sitting in the box, which caused her cat to avoid the box completely. At any rate, unused boxes still got a little bit of use out of them as storage units in the garage, so if you do buy and your cat doesn’t take to it, at the very least it doesn’t have to sit around gathering dust.

The CleverCat litter box is so simple in appearance, but simple in usage too. All you have to do is scoop the litter before you cover it back up. Without the smell or the sight of cat waste in your home, you’re back to feeling classy and keeping things clean. There’s no more cleaning up after my messy cat with a product like this. Check out more details over here!

More Guides To Check Out:

My cat is scratching the box mercilessly