Blog > Dog Tick Bite Lump: 7 Causes & What You Should Do

Ticks are an irritating nuisance at the best of times; at the worst, they are spreaders of disease and infection. Most of the time they won’t be too much of a trouble to your dog other than a consequential lump which will soon disappear. If it stays around for a while, however, more serious infliction may be at work. Worried about tick bite on dog? If it won’t go away, read on!

Why Does My Dog Have a Lump After I Removed A Tick?

Did you pull a tick off only to find a bump? Dog tick bites are usually accompanied by a small inflammation.

In the majority of cases this will subside after a day or so, and isn’t something to worry about. If, on the other hand, the lump shows no inclination of dwindling away after a couple of days, this could mean something more severe such as an infected tick bite.

Most frequently the stubborn swelling can be attributed to a retained tick head. This situation can easily arise if you are not careful in removing the tick; refer to the below section Removing Ticks.

If you think this is the case, the best course of action would be to take your dog to the vet, who will be able to eradicate the problem.

If the lump gets progressively larger after removing the tick, it is likely that the bite is infected. In this case, other symptoms such as oozing pus, a fever or lack of energy may also present themselves.

A dog tick bite infection such as this usually occurs in instances where the tick is fairly well embedded into the skin. Meaning that your dog would have had the tick for quite a while. 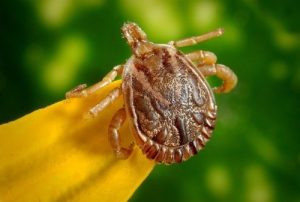 Otherwise, in the most extreme circumstance, tick bites are also attended by the danger of disease. They are most notably notorious propagators of Lyme disease, which, having similar symptoms, can be difficult to distinguish from an infection in its early stages. To make matters a little more confusing still, a condition called Rocky Mountain spotted fever also shares some of these likenesses.

The tick’s saliva alone, without having to bear a noxious cocktail of diseases, can be harmful to a dog who is allergic. Such an allergic reaction to a tick bite will also cause further inflammation, as well as potentially a rash.

You will know yourself whether your dog is prone to allergic reactions – if so this may well be the case.

Whatever you suspect the cause of the swelling to be, a prompt trip to the vet is the best course of action.

Ticks are a blood-sucking nuisance to mammals like you and your dog. They are arachnids which survive by burying themselves into the skin and feeding on blood. They will cling on with their mouth parts until they are fat and inflated, at which point they will fall off.

Their body will be visible during this process as a small dark lump which is around a few mm in size. Once they are full they swell out and turn a silverish blue color.

They are typically found in areas of thick vegetation like woodlands or patches of long grass, which are cool and damp. Here they await a passing animal. According to the AKC Canine Health Foundation When something juicy comes along, they grasp onto skin or fur at the lower regions of its body. They will then proceed to search the body for up to an hour to find a place to burrow in.

The resulting lump on its target is a reaction to fluids which are secreted by the tick’s feeding parts. It is called a granuloma. Via these fluids the transmission of disease of infection causing bacteria is undertaken.

The following are the steps you should take when learning how to remove a dog tick. If you have noticed a dog tick bite, get a pair of tweezers and remove it as quickly as you can. Alacrity will reduce the chance of infection or contamination by disease.

Don’t apply anything such as Vaseline or matches to the area, as these may agitate the tick, causing it to eject its harmful fluids. Grab the tick by its mouth parts using the tweezers, which will be at the point where it is connected to your dog’s body to your skin.

Pinching the tick’s body may also cause the diseased bodily fluids to be injected into your dog, so try to avoid this. Once you have it by the head, don’t yank the thing out.

The tick’s mouth part is covered in tiny barbs which can tear or be entrenched in the skin if you pull it out to quickly. It is therefore important to be patient; ease it out steadily. However, don’t worry too much about embedded barbs if something goes wrong, as these alone cannot transmit diseases.

Make sure that you inspect the wound area to ensure that you have managed to get rid of the entire tick. Once you are happy with your handiwork, wash it out with soap and water. Also, wash your hands. You may want to keep the tick for examination should your dog show signs of further distress. If so, make sure to house it in a well-sealed container.

Keep an eye on the bite to make sure the swelling decreases in size. If not, or if your dog is exhibiting some other unusual behaviors, contact your vet. If you are in an area where Lyme disease is especially prevalent, you may want to contact your vet straight away, as it can be treated quite simply with one dose of doxycycline within three days of infection.

A tick bite on dog lump could be put down to a few things. It is important to keep an eye on dog tick bites, as they could turn out to be more serious than they first seem.