When we mention cute dogs, the German Spitz may cross your mind. Known to be adorable and smart, there are many people who known them as pets. Furthermore, they are good companion goods, making them good pets. If you are considering getting one for yourself, continue reading the article for more information!

What is a German Spitz?

Unknown to many people, the German Spitz is not actually a breed of dogs. The German Spitz are bred in two sizes that are recognised by the Kennel Club, namely the Mittle and Klein. It is generally thought that they are the descendants of larger spitz dogs from Scandinavia and was introduced by the Vikings.

As the German Spitz is very intelligent and full of character, many people have developed a liking for them. They come into a wide variety and combination of colors, which is what makes the breed very attractive as well. The German Spitz is generally known to be alert, happy and fun-loving. They are very sociable dogs that like human affection. Hence, you should give them your attention but remember that it is also a very independent dog as well.

About Belgian Malinois versus German Shepherd

The history of the German Spitz originated from Pomerania, which is better known as Germany and Poland today. In 1450, they were initially used as watchdogs in the fields as they were very alert by nature. The Pomeranian is actually a small German Spirtz, importer from Germany to England one century ago.

By the 18th century, the royal family started being interested in them. Queen Victoria used to adored these small dogs, earning them the title VIctoria Pom. However, they were developed as their own breed ever since. The German Spitz today was name after a Dutch Leader, W. Kees, who revolted against the House of Orange.

In 1714, when George the first inherited the throne, they brought their German Spitz dogs with them to the English court. In the later half of the 18 century, Queen Charlotte was also known to have several German Spitzes.

Although their popularity decreased after World War 1, it eventually revived in Europe. By the 1970s, German Spitz were extremely popular again, especially in Germany, United Kingdom and Australia. 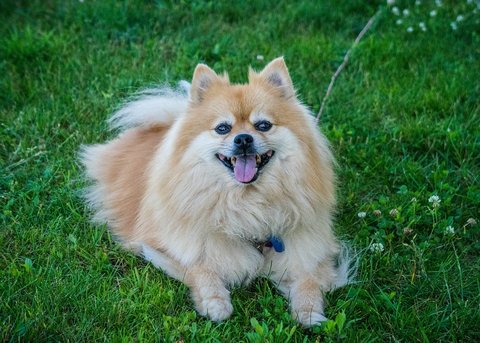 With a small built, they has a very thick coat that makes them stand out. They have a mane that covers their neck and frames their head. Their heads are rather broad with a rather flat skull. They also have a long muzzle, about half the length of their head.

This type of dog also has small triangular shaped ears that are pointed, with a set of oval shaped eyes. Most of them have black and white, or black with partially white eyes and even black and brown eyes in general.

With such a small body, you will be surprised that the German Spitz has a very sturdy body with nice level topline and well-developed loin and ribs. Their feet are small and round, with well arched toes. When they move, there is a sense of strength, although they have small paws. This is all thanks to their muscular hindquarters, giving them powerful back legs,

The German Spitz comes in a wide variety of colors, and they have a double coat, one woolly undercoat and a harsher top coat. The hairs are often long, straight and harder compared to other dogs and should cover all over its body, including the neck, limbs and tail. However, it should not form any whorls over their bodies.

You should try to make things fun for the German Spitz, if not they will start being a nuisance barker when they are bored. However, if trainings are fun, they will learning very quickly and do well in whatever you want them to learn. Hence, it is important is always give them things to do, or they could be tempted to get into unwanted trouble. 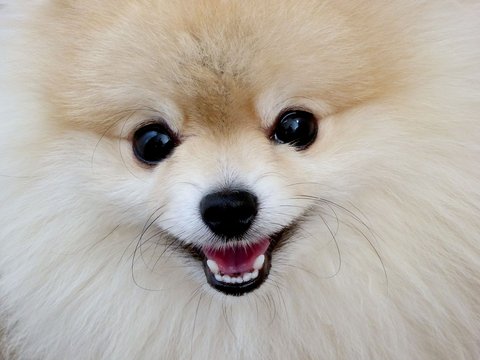 With an outgoing and fun personality, the German Spitz are generally very good with chidlren if he is raised together with them. However, parents and guardians should always supervise to make sure that the young children don’t end up injuring the dog on accident. You should also note that too many young children will make the German Spitz nervous.

As a dog that loves to interaction with humans, early exposure to other dogs and people can help the German Spitz to start socialising. You should let your German Spitz puppy meet as many people and dogs in its first four months to prevent shyness.

They make great companion dogs with proper socialisation. You will be happy that they love to interact with humans. Normally they are not nervous or overly aggressive towards strangers.

Alert at all times

Being an alert dog, they are very good as watchdogs as well. The German Spitz will bark at strangers they don’t know and other dogs in an attempt to alert you and guard off against those people or animals.

You can heave a sigh of relief as the German Spitz is relative low maintenance and only requires only minimal grooming. Their fur is also soft and silky, so it is unlikely to trap dirt in it. Although it is a long hair dog, you only need to brush them three times a week to ensure that ir is not tangled and does not have dirt in it.

Do note that the German Spitz shed fur rather heavily twice as year, so regularly grooming and brushing will definitely help you to remove the dead fur out from their bodies. If not, there will be lots of dog fur around your house when it comes to shedding season!

You should also brush the teeth of your German Spitz two to three times a week. If not, tartar and plague will build up in their mouths and its will result in bad breath and gum diseases. Smaller German Spitz also tend to have more dental issues.

Their nails should also be trimmed on a regular basis, at least once a month. You should be very cautious and careful when trimming dog nails. They have veins in them and will cause a lot of pain for your dog if it is accidentally chipped. If you are not confident of your skills, always get a professional groomer to help you.

One quick tip for you is to start grooming your pet dog from a very young age. This is train them to be used to it, so that they will not be temperamental when others groom them next time.

Lastly, it is important to clean their ears once a week. This helps your dog to remove excess wax, bacteria and foreign things that may be caught inside their ear. However, the cleaning process for the German Spitz is much easier compared to other dogs, since they have more open ears.

With a small and compact body, the German Spitz can live in an apartment as well. This makes them one of the more popular choices of dogs to own as a pet. As a dog that enjoys human interaction, you should keep it in at home rather than a yard. Hence, they make great companions for both young children and elderly.

However you should note that they are also very energetic in nature. Even though they can be active indoors, you should still let them stretch out their legs. Hence, it is good to bring them out to the nearby park for a walk or exercise once in a while.

About the English Shepherd

Perfect For Your Family?

You will be satisfied with the German Spitz if you are looking for a dog for companion. With its friendly nature and love for human interaction, they tend to get along well with children and the elderly. However, it is also a good idea to start socialising your German Spitz from young so that they can learn how to interact with humans and other dogs.

The German Spitz are generally very healthy dogs. The average lifespan of the of the dog is generally 10 to 15 years, with regular exercise and a healthy diet. However, they are also susceptible to some diseases too, such as progressive retinal atrophy, eye issues and patellar luxation.

This is the most significant genetic disorder in the German Spitz, which commonly causes blindness in young and adult dogs. It is caused by the death of a sensory nerve cell in their eyes. The Kennel Club and British Veterinary Association have partnered together to run a testing scheme for all breeding dogs to prevent the disease before it develops and worsens.

This is also one of the most common issues with the German Spitz. Eyes issues include persistent pupillary membranes and multifocal retinal dysplasia as well. Hence, if you notice that your German Spitz has any abnormal eye problem, you should consult a vet immediately.

This is more common in the Kleinspitz. Their bone structure causes the lack of support around the knee joint area, so their knee cap may slip out, affecting their legs. If you see your dog limping in an unusual way and is unable to straighten its limbs, you should send it to a vet immediately.

The German Spitz is always looking for an adventure and activity to do, and their intelligence makes then learn quickly. However, if you use traditional methods to teach them, you may face some difficulties. This is due to their high level of energy and enthusiasm. However, if you use rewards to train them, it is much easier.

Different dogs learn and train differently so it is good to experiment and see what works best. When you use the right training method, they can learn many things and will do so with enthusiasm and energy. However, you should note that they are rather playful and are not always obedient. So you may want to consider another breed if you are looking for a very obedient dog.

In conclusion, the German Spitz is one of the most popular dogs now and I absolutely understand why. Its adorable appearance and wonderful personality to be alert, friendly and fun-loving all at the same time makes it good pet.