Blog > How Long Do Cats Stay in Heat

Each year, millions of cats are given up for adoption. In fact, there are more cats in shelters than there are in people’s homes. The cat population problem is what drives veterinarians and animal welfare advocate groups to recommend spaying and neutering your cats.

When possible, this should be done before a female cat goes into heat the first time, but it can be hard to get an appointment and sometimes, she comes into heat unexpectedly. If you’re adopting a stray cat, she may even enter your home already pregnant.

It’s a good idea to educate yourself on your cat’s reproductive cycle, the process of how being in heat works, and how to best take care of your cat throughout the various stages of the process.

The Stages ofHeat Cycles in Cats 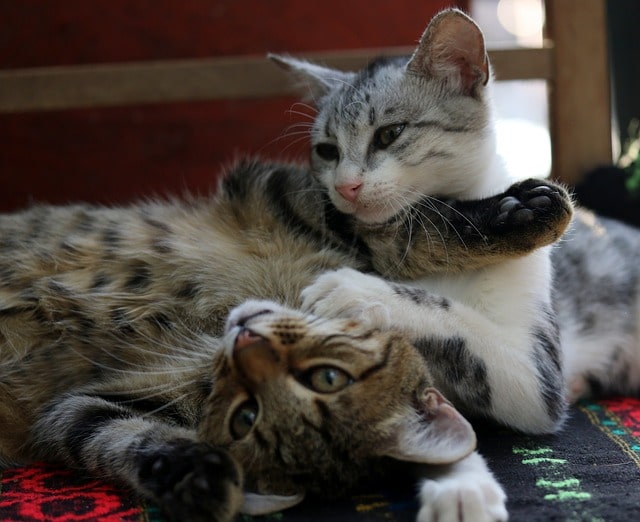 During the anestrous stage, the female cat is not in heat. Her reproductive system is inactive and she is not engaging in sexual activity. Generally, this stage lasts from September to January, as the low lighting levels and decrease in daylight hours prevents her from going into active heat.

Indoor cats can go into heat- even during the winter months- if the light conditions are right. If the artificial light inside of the home mimics the natural light, the female cat may be stimulated enough that she starts her cycle.

There are myths surrounding the heat cycle. One popular myth is that a cat who is allowed to have a litter of kittens before being spayed will be more friendly and sociable. This is not true and shouldn’t be used as a reason to allow or encourage a female to have kittens.

If your female lives with a male cat- whether it be her brother or father-, there is potential for breeding. Cats don’t discriminate when it comes to mating and will breed with whoever is available. It’s easy to forget this fact when your cat isn’t showing any signs of heat, but this is an important fact that should be remembered.

With the proestrus stage, also known as the second stage, come minor hormonal and behavioral changes. This stage follows directly behind the anestrous stage and during it, your cat’s reproductive system starts to become active. This is a short stage, lasting only 3 or 4 days.

In female dogs, the female’s genitals undergo major changes and start to swell noticeably. In female cats, however, the genitals only enlarge a little bit and may become slightly moist. There is usually no discharge during this stage.

During this stage, however, she will become restless and have an increased appetite. She will also begin to make calls from deep within her throat and become more affectionate to her owners.

The follicle stimulating hormone (FSH) and estrogen are key players in the promotion of egg development during this short but critical period.

The third stage, the estrus stage, is when the female is able to fall pregnant. This is the stage that is being referred to by the term “heat”. The length of this stage can be different for different cats, but usually lasts anywhere from 10-14 days.

The cat’s physical and hormonal changes became more noticeable during this stage. She will start to urinate more frequently and begin to cry out, yowling, as if she is in pain. As this stage progresses, the cries will become louder but don’t worry- she is not in pain and there is nothing wrong.

This behavior can quickly become annoying, so it’s important to be patient and understand that your cat is just following her instincts.

Female cats will almost certainly display odd behavior such as rubbing on the floor, objects, and against her owner’s legs. She will also lay on her belly with her back end in the air and when you rub her back or spine, she will push her rump into the air- a position that is considered the breeding position.

Some cats, in addition to frequent urination, will urinate on objects as a way of marking their territory. During this time, their urine is chalked full of pheromones and hormones that, for male cats, are signals.

This is the reason that when a female is in heat she seems to attract male cats. Sometimes, tomcats from miles away will attempt to come inside of the house or yard in order to mate.

Because cats only ovulate after being ”induced”, a female cat will need to mate 3-4 times within a 24 hour time frame in order for her eggs to be released. Once this happens, she can mate with various tomcats and if she falls pregnant, it is possible that the kittens have different fathers.

Immediately after the conclusion of the estrus stage comes the metestrus stage. This stage completes the cycle.

Your cat, who may have previously been brushing up on and rubbing against any male cats you may have, will now take to ignoring them and return to normal.

When will my cat go into heat?

Cats, like humans, vary from one to another. When a cat will go into her first heat depends on a number of factors and can never be guaranteed. Generally, cats go into heat around 6 months old. I’ve listed  two of the most important factors and given a brief explanation of each below.

Some breeds are programmed to go into heat  earlier or later than most breeds. The siamese, for example, typically goes into heat around 4 months old, while others may go in when they are as old as 10 months.

The environment in which a female cat grows up in can affect her cycle. Feral cats that are frequently around males might mature faster than indoor cats, and, in turn, reach sexual maturity and heat sooner.

Reasons Why You Should Prevent Heat in Your Cat

As a responsible cat owner, you should always aim to get your cat spayed. Unless you’re looking to allow your cat to breed, spaying your cat is the ethical thing to do. Besides preventing unwanted pregnancies, spaying your cat has a myriad of benefits. In this section, we take a look at some of the reasons why you should spay your cat.

The main reason why you should always get your cat neutered is to protect her from unwanted pregnancies. While you may argue that your beloved princess is confined indoors at all times, all it takes is for a errant tomcat to get her pregnant.

When left unchecked, these kittens will go on to breed even more which contributes significantly to the problem of strays in your area. Most of the time, these kittens grow up to become stray cats who live short often difficult lives. Even more tragically, some unwanted litters are even drowned by terrible examples of humanity.

As an owner, you have a responsibility to protect your cat and any kittens that she may mother from such a fate. Unless you intend to start a cat family, the better choice on the long-term would be to always ensure that your cat is neutered. The cost of neutering a cat is minute compared to the effects of allowing cats to breed uncontrollably.

Also, if you have other male cats living in the house, spaying both genders will not only protect the female from unwanted pregnancies, but it will also ensure that the male cat will not act aggressively towards other males.

Stops your cat from roaming

Cats being curious creatures have an innate love for wandering. Even the most spoilt princess from time to time would be tempted to explore the world outside around her. This situation becomes doubly so when your cat goes on heat.

During this period, your cat’s instincts are to find a partner and mate. Hence, an unneutered cat would become very restless during this period. Often yowling and meowing at the top of her lungs calling for a partner. Not only is this extremely distracting, but it also attracts the attention of any tomcats who may be in the area.

Hence, you’ll notice a sudden uptake in the tomcat population in the area around your home and before you know it, tomcats will be regularly visiting you on a daily basis. Furthermore female cats on heat are more likely to try and escape which can be extremely dangerous for her.

Not only would she be subject to the attentions of numerous tomcats, but she would be exposed to the dangers of the world outside. From catnappers to errant drivers who take joy in running over innocent animals.

It is an all too common fact that irresponsible owners allow their unneutered pets to roam without any supervision. Not only does this spread disease, but it also often means that their pets are in constant danger of injury or death.

When you neuter your cat, her desire to roam is gone and she will not attract the attentions of any male cats in your area. Hence ensuring her safety and your peace of mind. Finally, this also has the added benefit of ensuring that cats in your area do not turn violent as they compete for a potential mate.

Protects her from diseases

Just like humans, cats are also susceptible to diseases related to their reproductive organs. When left unneutered, your beloved cat’s chance of developing a variety of diseases is much higher when compared to a cat who has been spayed.

Some may argue that neutering a cat is a costly affair which is not worthwhile. However, given the fact that your cat will be able to live a longer and healthier life, free of disease, the cost of neutering her should be just a speck on the horizon.

My Cat is Pregnant. What Do I Do?

Unfortunately, accidents happen and unwanted pregnancies are all too real. As a responsible pet owner, you need to ensure that your soon-to-be mommy cat has a safe, comfortable place to give birth and raise her kittens.

Here, we take a look at how you can prepare for the imminent arrival of a bouncing litter of kittens.

Schedule a visit to the vet

Prepare an area for your cat to rest

At home, minimize stress and noise to ensure that your cat has a safe delivery. You can also wall off an easily-cleaned section of your home as a “maternity ward” of sorts. This area should be warm, dry, and located in a quiet area.

Line the area with plenty of cloth or rags to provide kitty with a comfortable birthing area.

Standby to help if needed

As kitty’s pregnancy advances, you’ll notice a change in behavior. Your once affectionate princess can potentially turn into a hissing, angry ball of fur. During this time, minimize stress and ensure that she has plenty of food and water available. Most of the time, your cat should be able to handle birth on her own. Just keep an eye on her and contact the vet should the birth take more than a few hours.

Cats are a joy to own and live with. However, as a responsible pet owner and animal lover, you should always take the appropriate steps to ensure that your cat lives a long and happy life together with you.