The litter robot is shaped uniquely, which might make your cat feel uncertain when using it—especially since it will automatically clean itself. You can do a few things to make the transition a little easier for them. So, why is my cat not using the litter box? Read on to find out. 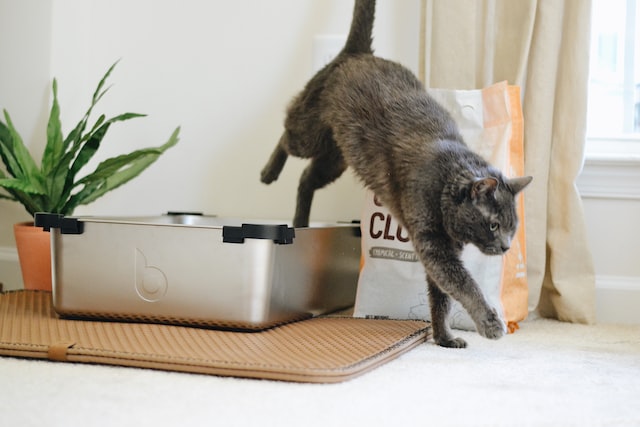 Why Cat Won’t Use Litter Robot?

Your Cat is Scared

You’ve probably already guessed it. Your cat is scared by the unfamiliarity of a new litter box. Plus, the sounds Litter Robot produces (or any other automatic boxes) only add to your cat’s fear. Don’t think you can just get rid of its old litter box or regular litter box so easily.

If you’re wonder how to attract cat to litter box, see these tips:

When You First Start to Use The Litter Robot, Keep It Off

Your cat might be startled if the little robot begins working when they try to jump in. Granted, this should not ever happen since it detects when your cat is inside, so it will never activate while your cat is using it, but the noise of it moving might still make it scary for your cat.

Start with your litter robot turned off, then. Give them a little bit of time to adjust and become familiar with the new shape and appearance of their little box. And keep it unplugged for a little while as they start using it—just plug it back in for a single cycle after your cat uses it. As you give your cat time to adjust, you should be able to plug it in normally and let it work.

Keep It on Semi-Automatic Mode

While your cat is still adjusting to their new litter box, you can only plug it in when they use it. Once they start using it, you should start with the semi-automatic option.

Basically, the semi-automatic setting means that it will clean on a regular schedule, but not necessarily directly after each clean. This will give your cat the time to see it work without startling them.

You might be tempted to just grab the old litter box and completely replace it, but hold on a minute. Instead, you should take it slow when training your cat to use a new litter box for the first time. Realize your cat is frightened and not feeling comfortable. Always introduce your cat slowly and be patient. Leave the old little box there for a little while. Completely removing it might result in you cleaning up accidents around the house.

But you can still entice your cat to use the new robot by adding a scoop of the old litter to the new one. You can also let the waste accumulate in your old box to motivate your cat to try something new.

Maybe you can try moving the litter box later if you want to redecorate, but for now, you should keep your litter robot right next to where you had the original box. Your cat knows where they’re supposed to go to use their box already, and that’s where they feel safe. Don’t mix it up on them now with a new box.

As you’re getting your pet used to their new little box, one of the best things you can do is to entice them with catnip or treats. Place those treats on the step of the robot or right around it so that they associate the reward with the litter box.

Don’t stop there either! Pay attention to when your cat begins to use their litter robot. This is when you jump in with treats, play sessions, and some cuddles to reinforce their using it.

Okay, so this is a little bit of a more involved solution. If you’re still having trouble getting your pet to check out their new litter robot, you can hide it in the box it comes in to convince them that it’s just a normal box.

You can let your cat try to acclimate on their own, but you can also sit right next to them while they get used to the litter robot. Just being there will help them realize that it isn’t scary or strange. As they get used to it, you can let them start to use it alone.

Take It Step By Step

It’s normal for your cat to get scared. Your cat needs assurance from you and needs time to get used to the new object at home. However, the good news is that a smooth transition is completely possible. Allow your cat some time, and know that cats adapt ultimately!