Blog > How To Tell If Your Dog Is Pregnant: 5 Things To Know

As pet parents, we try our best to keep our dogs healthy and happy. But sometimes we feel a little underprepared. If you feel like your dog might be expecting, no doubt you’ll feel a little lost (especially if you haven’t helped deliver a litter before)! Before you flip out and wonder “is my dog pregnant?”, here’s how to tell if your dog is pregnant at home. We also answers questions like “how long is a dog pregnant?” and explain the symptoms week by week. 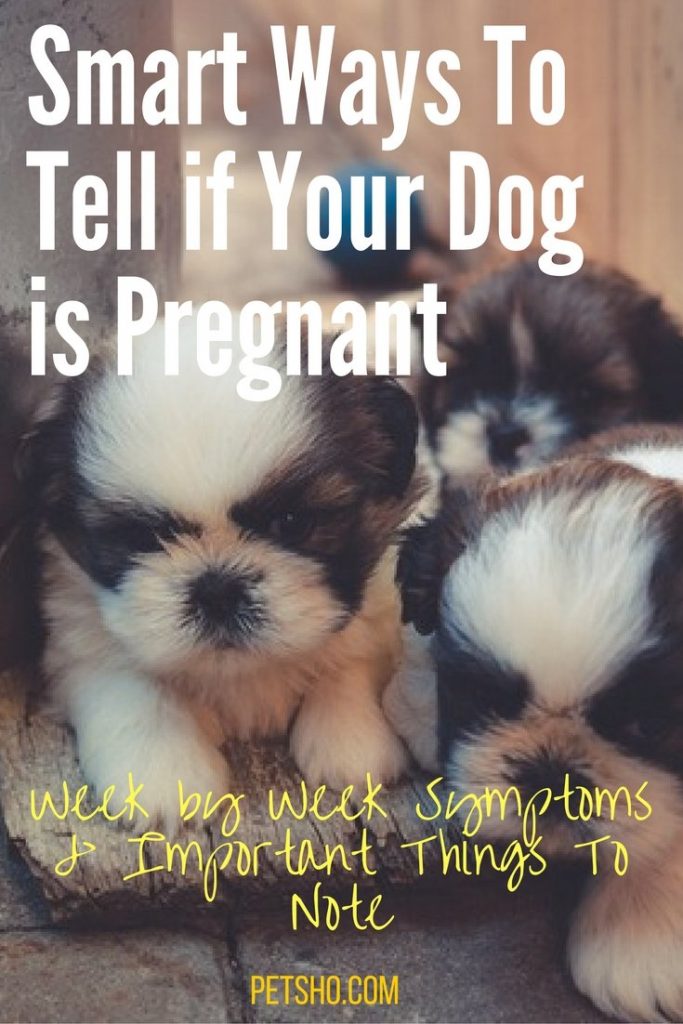 Is My Dog Pregnant?

It’s really tough to tell if your pet is pregnant until you get to her last few weeks of pregnancy. That might seem a little surprising. Afterall, how to tell if your dog is pregnant at home? Many owners notice only the obvious changes such as the increase in belly size, rather than the less obvious physical and behavioral changes.

So is my dog pregnant? There are definitely a few things you need to look out for.

Physical symptoms of pregnant dog is a good way you can tell if your dog is pregnant at home. If she has been through a heat, or a mating cycle recently, you might want to take a few minutes to check her out.

Be aware though that dogs that are not pregnant might experience some of these symptoms right after a heat too, so go to a vet to be sure.

The color and size of her nipples are very important to look at since they are some of the earliest signs of pregnancy.

If they “pink up,” meaning they appear rosier and larger, this is a great sign. You’ll start to see this around two to three weeks after conception. At around four, you’ll see vaginal discharge.

There are also dogs that skip meals as a type of “morning sickness” in the beginning of the pregnancy, but this is rare. More dogs want more in the beginning, but don’t give her too much. Try and split up meals if this is the case.

The belly will eventually grow in size of course to accommodate the pups. But be aware that this is not obvious until the fourth or fifth week.

That’s why many owners don’t know their pet is expecting until later. If you’re increasing her amount of food too early, you might confuse her fat with a pregnancy.

The last portion of the pregnancy is when it will become really obvious with the clear rounding of the belly. The mammary glands will be swollen by this time.

You can try to feel the puppies move by placing your hand on her. But it’s not always possible, so don’t be discouraged if you can’t.

What other symptoms are there of a pregnant dog other than physical symptoms though?

Is My Dog Acting Differently?

Well, you actually might not notice your pet acting much different than normal. That’s why physical symptoms of pregnant dog are the best indication. But behavioral changes can help you confirm your suspicions too.

There are different reactions to pregnancy, although you might see your pet becoming more quiet and tired earlier. Sick pets show these signs too, so maybe take her to the vet if you see this.

It’s much more obvious in the last third of the pregnancy, since her size and discomfort will make her want to sleep more and move less. Be aware that there are multiple changes though. Some canines might be more affectionate and clingy while others will want to be alone. Just be aware of what she needs.

She might change her eating habits a little towards the end of the pregnancy too and lose her appetite as early as three weeks. As the puppies begin to take up more space, the mother will want to eat more meals that are smaller.

Watch out for nesting behaviors too, which is how she starts to prepare for the birth.

She’ll start to get blankets and clothing and find a warm and secluded place that is safe. This can start anywhere from two to three weeks to two to three days prior to birthing.

Alright, so we’ve gone through some changes you should look out for, but it always helps to have some organization with canine pregnancy symptoms week by week that you can use as a guide. If you suspect your pet is expecting, keep an eye out for these changes:

– At 2-3 weeks, the nipples should “pink up.”
– Early on, your canine might seem tired or quiet.
– It’s not until the second half of the pregnancy, or around 4-5 weeks, that you’ll see the increase in belly size.
– Around 4 weeks, you might also see vaginal discharge.
– Do not increase food until the final third of the pregnancy, so around 6 weeks.
– 6-9 weeks is when the pregnancy is obvious due to the rounding of the belly, and when food should be increased.
– She might eat smaller, but more frequent meals.
– As early as three weeks before or as late as two days before, she might start nesting.

As always, the best way to be sure of pregnancy, despite all the things you can do at home, is to take her to the vet. Even if she isn’t expecting in the end, it’s best to make sure she’s alright.

The vet can do multiple things to determine this, like a physical examination about halfway through. From six weeks and on, your vet can check heartbeats, but this can be difficult because of the layers of fat in her body.

A blood test can be done also after 28 days for the most reliability and as early as 20-25 days, and is considered one of the best methods. The earliest confirmation however comes from an ultrasound done around day 16.

The latest confirmation would be an x-ray around 45 days, which is only usually done to see how many puppies rather than if there are puppies at all.

Believe it or not, there are home pregnancy tests for dogs. But make sure to go to your vet to get one. Human tests are unreliable for pets.

How Long Is a Dog Pregnant For?

You may have guessed already based on the weeks we’ve given – a dog will be pregnant for around two months, usually from 58-66 days. This is why most owners don’t notice that their dog is pregnant until the later stages.

It’s so little time between conception and birth that by the time you realize, she’s already halfway there!

It’s not always easy to confirm if your dog is expecting, but it doesn’t have to be so difficult either.

Just keep an eye on her for a while, and be sure to look for both physical and behavioral changes. It’s ok to feel a little confused at first. But with the proper information, you can stay informed and ready for the puppies to come.