If you’re thinking of getting a new dog, and it happens to be a mix of the two amazing breeds of Irish Wolfhound and a Labrador Retriever, then you might want to find out more about their general appearance, personality, and health.

The best way to get a clear picture of what you should expect from your new lab wolfhound mix puppy is to take a closer look at the parent breeds involved.

Just like the temperament, the best way to understand the appearance you should expect from a mix between an Irish Wolfhound and a Labrador Retriever is to have a look at some of the pictures online, like the one below. 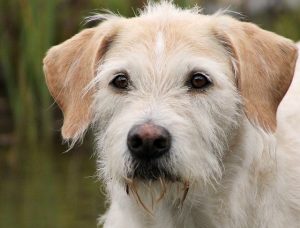 The Labrador Retriever is one of the most popular dog breeds in the UK and the US. It is a strongly built, medium-sized dog with a short and dense coat. Labradors have really powerful jaws and ‘friendly’ eyes that are often related to their character as good-tempered and highly intelligent dogs. Labrador Retrievers are registered in three different colors: black (dark black color), yellow (ranging from cream to fox-red), and chocolate (medium to dark brown).

The fact that Irish Wolfhounds were bred for solitary hunts proved the breed’s ability to visualize the landscape, and highly rely on their vision at all times. Just like the name suggests, the breed has been bred to hunt wolves in a way that they would be ‘fast enough to catch wolves and strong enough to kill them’.

When it comes to Irish Wolfhounds, it’s difficult to fully predict their personality, exactly because they are one of the breeds known for their individualism. Although, it’s worth noting that they are mindless dogs that are almost never destructive in the home. They are highly intelligent, quiet and easygoing dogs, usually with introvert character. Irish Wolfhounds are known for their tendency to form strong bonds with their family, which makes them into dogs that would rather guard their family then the family’s home.

On the other hand, because of their tendency to get attached to the family and other pets, they are not the most adaptable of breeds. Most Irish Wolfhounds are very good and gentle with children and easy to train. The most basic characteristic when it comes to this breed is that they are really independent dogs.

Labradors are a really kind, outgoing, pleasant dogs. Unlike the Irish Wolfhound, Labradors heavily rely on their strong sense of smell. Although they have really strong jaws, Labradors are gentle and very prone to chewing objects and love holding objects and hands in their mouth, but with great gentleness.

The breed has a great reputation as an amazing family dog because of its even temper and since they are amazing with children and other pets. Usually, Labradors are very active dogs with a puppy-like temperament and character until around the age of three when they finally start maturing.

Sadly, just like many large dog breeds, Irish Wolfhounds have a relatively short lifespan, with 6-10 years, and 7 being the average. The leading causes of death among Irish Wolfhounds is bone cancer and dilated cardiomyopathy.

The breed is also prone to gastric torsion and hereditary intrahepatic portosystemic shunt. Studies conducted on Irish Wolfhounds and other breeds show that a higher risk of bone cancer can be connected to neutering and that castration of males should be avoided until the dog is fully developed and grown.

But generally speaking, the Irish Wolfhound has good health and does not need additional supplements, as long as they are fed high-quality dog food.

When it comes to the Labrador Retriever, their average lifespan is a bit longer with 12 years and 3 months, even though it’s worth saying that some Labradors live to be 19 years of age. They are a really strong and healthy breed with only few major health problems, most of them related to inherited disorders and obesity.

Labradors simply like to eat, which means, just like any other similar breed, that if they don’t exercise regularly and the amount of food they eat is not monitored, they are prone to obesity. As a dog owner, you need to learn that obesity is a serious condition among dogs, not something to be taken lightly, and it’s exactly Labradors of all dog breeds that are the ones most likely to get obese.

And with Labradors being strongly built and active dogs, getting a nice amount of exercise is not a problem. If the weight of the Labrador is not controlled, their obesity can cause health issues like hip dysplasia and joint problems, that can further on lead to serious secondary diseases like diabetes and osteoarthritis.

Just like any other mix of two dog breeds, it’s really difficult to say what they will look or act like. Some puppies take more from one parent breed, while others might get more characteristics from the other. But unlike the mix of some unpredictable and unfriendly breeds, a mix of an Irish Wolfhound and a Labrador Retriever will result in a calm, strongly built family dog, regardless of which parent breed the puppy gets its appearance and character from.