As any pet owner knows, dealing with pet waste can be a huge hassle. With your cat, there’s always going to be some sort of mess to clean up. But what if there was a way to make the whole process a lot easier? Enter the Litter-Robot. This self-cleaning litter box is designed to make your life a whole lot easier. But which litter-robot models are the best? The new Litter Robot 4 or LR3? We’ve put together a detailed comparison to help you decide which Litter-Robot is right for you.

Litter-Robot 4 At A Glance 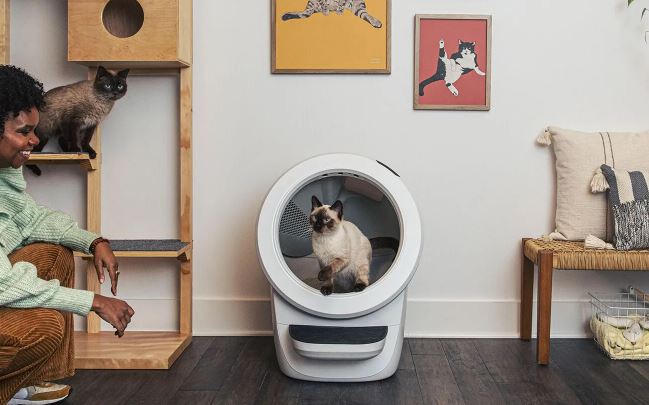 Litter Robot 3 At A Glance

This is the third generation of the world’s first self-cleaning litter box. It has a durable construction made from an ABS plastic and aluminum.

There are several features of the Litter-Robot 3 that make it a great choice for your cat’s litter needs. One feature is the self-cleaning cycle. This means that the Litter Robot 3 will automatically clean itself after each use, so you don’t have to worry about scooping or changing the litter yourself. Another feature is the adjustable timer. You can set the timer to clean the litter box every 1, 2, or 3 hours, or you can set it to clean on a schedule that works for you. Lastly, the LR3 comes with a detachable bag system that makes it easy to empty and clean.

When deciding between which automatic litter box to purchase, you want to primarily focus on what is different between the two to make the best decision for you and your cats. However, it’s also important to note the similarities.

Some other features that are present in both the Litter-Robot 3 and the Litter-Robot 4 are that they both weigh approximately 24 pounds without the litter, both have wifi connectivity, both are compatible with both iOS and Andriod, and both have a litter bed that is 24×24 in size.

If you are in the market for an automatic litter box, you may be wondering if the Litter-Robot 4 is worth the extra money over the Litter-Robot 3. Let’s have a closer look at their differences.

Another benefit of the Litter-Robot 4 is that it has a bigger capacity than the Litter Robot 3. It can hold up to 20 lbs of litter, compared to the Litter Robot 3’s capacity of only 14 lbs. This means that you won’t have to empty the litter box as often, and it’s great for households with multiple cats. This means that it can hold more litter and waste, which is ideal for homes with multiple cats.

The sensor on the LR3 is a lot more basic. It has a weight scale sensor that activates the system when your cat steps on. With the LR4, however, you get 2 sensors. The Smart Weight Scale sensor can sense your cat in the machine and record its weight. The Curtain sensor is positioned at the entrance of the machine and can sense your cat entering. With these 2 sensors working together, LR4 activates and works even more safely than before.

Minimum Size Of Cats That Can Use Each

For the Litter-Robot 4, the minimum weight a cat needs to be in order to use the LR4 properly is 3 pounds. The LR4 can support cats that weigh more than this minimum.

For the Litter-Robot 3, the minimum weight a cat needs to be in order to use it properly is 5 pounds. Based on this weight minimum, the Litter-Robot 4 is better suited for smaller cats and kittens.

The sensor on the LR3 is a lot more basic. It has a weight scale sensor that activates the system when your cat steps on.

LR4 boasts a special WhisperQuiet function. It’s a patented technological feature which makes the machine clean so quietly that you can even place it in your room!

Litter-Robot 4 has a new and improved sifting screen which releases lesser dust particles into the air while cleaning. If you or your family member has an allergy to dust, it’s best to pick LR4.

If you have the LR3, you might have disliked the positioning of the nightlight under the bonnet. With the new and improved LR4, the nightlight is now at the entrance and it brightens up the litter bed area.

As you know, there are newly upgraded, and improved smart sensors in Litter-Robot 4, such as the smart weight sensor in the curtain sensor. These sensors are reflected in the Whisker app, which you won’t see in the app of the Litter-Robot 3 Connect.

In comparison, the LR 3 Connect does not tell you the waste levels in real-time. While it does tell you the amount of waste, it doesn’t update in real time. You also need to click on reset gauge on the app each time you empty out the drawer. It also calculates the waste level in a different manner from the Litter-Robot 4. With the LR 3 Connect, it calculates according to the number of rotations.

Another smart feature of the Litter-Robot 4 that’s missing in Litter-Robot 3 is how it lets you know how much cat litter is in the machine. The app will tell you if it’s low or optimal. When the bar is blue, it means the cat litter level is optimal. When the bar is red in color, it means the cat litter level is low. Recording your cat’s weight is yet another special feature that LR4 offers. The app tells you the last weight that was recorded inside the globe, according to the smart scale sensor that’s installed at the unit base.This is especially useful if you have a few cats at home and want to know which cat it was that used the little box while you weren’t watching. In contrast, the Litter Robot 3 Connect does not have a cat weight feature.

With LR3 Connect, you don’t get so much customization. The only thing you can do is turn the night light off or set it to auto; you can’t change the light settings.

LR4 lets you put the machine on standby for however many hours you prefer. One example is if you need it to not operate in the middle of the night when everybody at home is asleep. You can even have different settings for weekdays and weekends. Conversely, the Litter Robot 3 Connect only lets you set the sleep mode, and it only lets you turn on the sleep mode for eight hours. Furthermore, it’s limited to a weekly setting; you can’t have different settings on weekdays and weekends.

Odor control is another feature that makes automatic litter boxes so popular. With normal litter boxes, you have to do regular cleanings in order to keep your home from filling with the odors that your cat leaves after they relieve themselves. This can make your home quite unpleasant. The odor control with the Litter-Robot 4 helps to prevent these odors from taking over your home.

The SafeCat system is used by the Litter-Robot 4. This system consists of 3 sensors that are located at the entry of the Globe. This allows the system to detect your cat’s body entering and exiting the litter box, so it knows when to activate since you do not want the cleaning cycle to activate while your cat is still inside.

Check the price here and get $25 off!