When you think of cat litter, you probably think of those little pellets that somehow end up everywhere. Well, that’s what I think about anyway, but cat litter has a lot of potentials to be more than the grey, mundane pellets you’ve come to know.

Pretty Litter has tapped into this potential. This company is subscription-based, and excel in one thing: cat litter, and not just any cat litter. Pretty Litter uses silica gel cat litter, which will change color in reaction to the pH level of your cat’s urine. This is meant to provide you insight into the health of your cat, especially their urinary tract.

This sounds exciting, but I was curious about how well it worked. A good cat litter should be low dust, have low tracking, and should provide odor control too. On top of that, you’ll want an affordable option and a bag that will last for an entire month.

But beyond all that, there’s one more important question: do cats like using this special litter? I had to know, which is why I bought some myself to give it a try.

Before that, let’s take a look at Pretty Litter themselves.

10% Off First Charge. Use Code: AFF10 Applies to first charge only One use per customer

Pretty Litter was initially created by Carly Martinetti, who has experienced something every cat owner has dealt with: “litter depression.” Martinetti uses this term to describe that terrible feeling that accompanies changing the cat litter. In an interview on Seat 42F, she says that “I was always just super depressed changing their litter.” Most cat owners can relate to her desire to use a brighter and less depressing cat litter box.

This led to Martinetti’s cat litter vision. In 2015, she was one of the top 3 contestants in the ABC Family reality shows Startup U. She met chemists, marketers, and entrepreneurs who helped her turn the Pretty Litter vision into a reality. Martinetti went on to co-found the company with Daniel Rotman, who is the company’s current CEO.

Now, Pretty Litter stands out as a bright and more appealing alternative to the traditional clay litter. It’s convenient since it uses silica gel litter in addition to the subscription model and the colorful health monitoring. 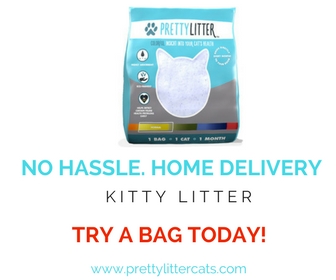 So, how does this litter work? Well, your cat should notice no difference: they step in the box, use it, and step out. The actual litter will change color to tell you about your cat’s health though. The litter is part of a subscription model as well, which means that you don’t need to run to the store nearly as often.

The silica gel crystals work to absorb moisture and odor in seconds. You won’t smell anything even in you don’t scoop for an entire month. All you have to do remove the solids and stir the litter each day to encourage full absorption when your cat uses the box.

When the litter can’t absorb any more, it will become saturated. Just like a paper towel that can’t soak up more liquid, the crystals will stop soaking up urine. This is when you’ll notice some liquid pooling in the box and should replace your crystals.

The litter is full of tiny pH detectors. When you look, you’ll see the tiny orange flecks that, when wet, will make the litter change color. Depending on the pH levels of your cat’s urine, the color will range from orange to dark blue. Check the included card to understand your results, but I’ve got the details here too.

Changing from Green to Blue

If you see this color, that is a signal of alkalinity. This can indicate some possible urinary tract infections.

Changing from Orange to Red

On the other hand, you might notice more orangey coloring. This potentially signals metabolic acidosis and kidney tubular acidosis. Low urinary pH like this can contribute to other problems too, like the development of calcium oxalate crystals.

This is a useful tool to see potential problems. But remember: Pretty Litter is not for a diagnosis! I can’t emphasize that enough.

You’ll see the pH of your litter without knowing whether your cat has a problem. A change in pH can also be due to diet changes, stress, and weather, or the litter might just go blue because it’s too saturated. 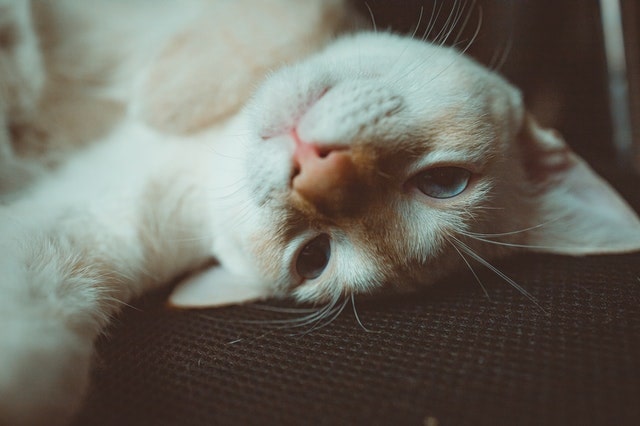 Rest assured that yes, Pretty Litter is safe, potentially more so than traditional clumping clay. In clumping litter, there’s usually silica dust, but there aren’t the same gel crystals. Without this dust, the silica gel litter is less dangerous. It will not release any of the carcinogenic or irritating particles.

You can use Pretty Litter for all cats and kittens. It won’t harm them since it doesn’t expand in the GI tract and has no harmful chemicals. Cats won’t get sick if they accidentally ingest some while they’re playing or grooming.

My Pretty Litter Review – My Story in a Nutshell

Now you know the basics about Pretty Litter. But the real question is whether it works from the buying process onwards.

When you order, you’ll be asked online about how many cats you have in your home. This helps Pretty Litter select the right plan for your household. I happen to have two cats, so I was signed up for a once a month box with two four-pound bags of litter. This cost me $39.

It was shipped the next day, and I received it ten days later. Even receiving it in the mail was much different than picking up a box of clay litter. It was packed securely, with little change to break open or drop to the floor.

I’ll admit that I was a little suspicious though. The box was only eight pounds, and it was supposed to have all the litter I needed a whole month?

But in addition to just the litter, you’ll notice a card in your order that explains how the litter works. It will have a ruler on it to help you get the right litter depth. 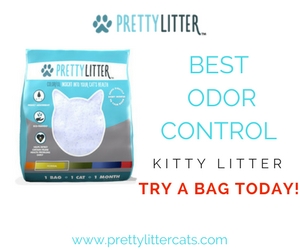 Pretty Litter certainly lives up to its name. It is pleasing to the eye and resembles salt that has been coarsely grounded. Pretty Litter takes on the appearance of yellow and orange specks mixing with an overall color of white. I came to learn that those “specks” were pH detectors that cause the litter to change colors.

Pretty Litter usually comes in a 4-pound bag and the company that makes it claims that one bag of it is enough to fit an entire litter box and last for a month for one cat. As anyone would believe, that sounds like amazing news for many cat owners. However, this information turned out to be very misleading.

One bag wasn’t adequate. I could not fill the litter box to two inches.

Pretty Litter says to load your litter box with 2″ of the litter. This way, you can get the best level of absorption out of their product while keeping the litter from becoming full before the end of the month. However, this does not account for the various sizes of litter boxes amongst pet owners. So one 4-pound bag will not fill ever litter box.

Within 30 days with a subscription to Pretty Litter, they will be more than willing to send you more litter at no additional cost to you. Make sure you take advantage of that within the 30 days or you will have to upgrade your subscription after it is over. I decided to test the litter I already had all in one box to see what the result would be.

There was no visible sign of litter tracking anywhere in the house or on my cat’s paws with the use of Pretty Litter. Other litter products would have made a very apparent mess and my cat would be struggling to get clumps of litter out of its paws. Pretty Litter, however, turned out to be a much cleaner alternative to the product I was using previously.

Much to my surprise, Pretty Litter’ level of odor control was excellent when I first started using it. Fecal or urine odor was practically undetectable. That is just another one of the amazing perks that I received with this product.

The Dust Factor: Is it dusty?

Despite other users complaining that Pretty Liter was dusty, I did not seem to have an issue with it at all. Pretty Litter was practically dust-free. This product took much of the hassle and concerns about dust allergens off of my mind so I could focus on maintaining an exceptionally clean litter box.

Pretty Litter was off to a good start at the beginning, but over time I noticed that the litter turned more yellow the more it absorbed urine. I determined that it would only be a matter of time before the litter became too saturated to work efficiently and it would cease to provide its amazing level of odor control. It turns out that I was correct in that aspect as the odor control did diminish much faster than the level of absorption did. However, it is common for litter to turn yellow as it continues to absorb urine so in hindsight this is another thing that I expected to happen.

The pH of white vinegar is about 2.5, water is about 7, and lye is about 13. The pH level of healthy cat urine places right between white vinegar and water at 6-6.5. My cat’s urine remained at a healthy level for the entire testing period.

It wasn’t difficult to cancel my subscription.

All I had to do was go to ‘manage subscription’ from my user account and cancel my subscription from there. It was as easy as a simple click and it was over.

In a subscription, the price of Pretty Litter varies depending on how many bags you choose to buy at a time. For example, a single 4-pound bag a month will be $22 while two a month will be around $39. With a bundle package, you will likely get one bag for free along with the other bags you purchase.

Pretty Litter offers a variety of options for the number of bags you want to purchase at once, which is a great convenience to anyone who needs to buy a lot of bags at once. Shipping is free for most states, but not for all of them. Sadly, Pretty Litter seems to be one of the more expensive options to choose from seeing as how you are paying more for the convenience that the company provides rather than the litter itself.

Pretty Litter is an overall good choice for cat litter in my opinion. It is convenient, comes with customizable options for litter purchase, and can detect any challenge in the pH balance of your cat’s urine to help you keep track of your cat’s health.

Despite the cost of Pretty Litter, you will still benefit from its level of convenience. You can get the most out of your subscription by choosing to buy more than one bag at a time.

Pretty Litter is not available in any other retailers other than its official website. Luckily, you can still buy individual bags of Pretty Litter without having to sign up for a subscription.