Blog > Why Do Puppies Breathe Fast?

Having a pup can be nerve racking. When they start having unusual behavior, such as heavy breathing or weird movements, you may wonder, why do puppies breathe fast?

You will be worried sick if you don’t know anything about puppies breathing fast. There are some instances where you should be alert and act immediately. Although in most cases, your puppies may just be breathing fast to catch their breath after exercise or sleeping and idling.

What to Look Out For (Signs of Rapid Breathing)

To observe for signs of rapid breathing, look at your puppies closely. Their breathing motion should be rather fast so that should be a visual clue to indicate that they are not breathing at their normal pace.

Sometimes, when your puppies are breathing fast, they may even look like they’re in trouble. They might exhibit body movements like wriggling, twitching or whining. All these signs and actions may cause you to start worrying about them.

Your puppies and dog’s respiratory system includes their nose, mouth, pharynx, larynx, trachea and lungs. As air is taken in through their nose and mouth, it goes through the trachea and into the lungs. At the lungs, oxygen is absorbed by the red blood cell, for them to carry oxygen throughout the body.

At the same time, carbon dioxide is release from the red blood cell to the air in the lungs. It is then exhaled through the nose and mouth, into the atmosphere. Any diseases that affect parts of the respiratory system can lead to breathing problems in puppies and dogs. If not treated earlier, it may develop into potentially dangerous problems.

Sometimes, you may find it hard to differentiate if your puppy is breathing fast or it has developed respiratory disease. It is hard to tell the difference but you should learn to do so. This could potentially prevent a crisis from happening to your pet.

When your puppy is breathing normally, they should have a respiratory rate of around 20 to 34 breaths per minute. Their movements should also seem relaxes and they should not put so much effort into breathing.

However, do note that your puppies may naturally start breathing faster after exercising or they are stressed or even excited.

Reasons Why My Puppy Is Breathing So Fast

Before you start panicking and start sending your puppy to a vet, it is important to understand some reasons why your puppy is breathing so fast.

Your puppy may be cooling down

After some vigorous exercise and running around, your puppy may start to breathe rapidly. This is because they are trying to cool down their bodies. Unlike humans, puppies and dogs don’t have many sweat glands, so they pant to bring their temperatures down.

You can also help them to cool down by giving them fresh water in a bowl to drink and bring them to a cooler place with shade.

Your puppy may be dreaming

When your puppy is asleep, you may observe that their bellies will move up and down and they start to breathe very quickly. However, do not start worrying because your puppy may just be dreaming.

Although we are unsure what puppies dream about, we can use our personal experience to imagine it. If their dreams contain scary or exciting experiences, their body will naturally react to it. So, don’t worry too much and remember that dreaming is just a natural process of your puppies.

Your puppy may even be stressed 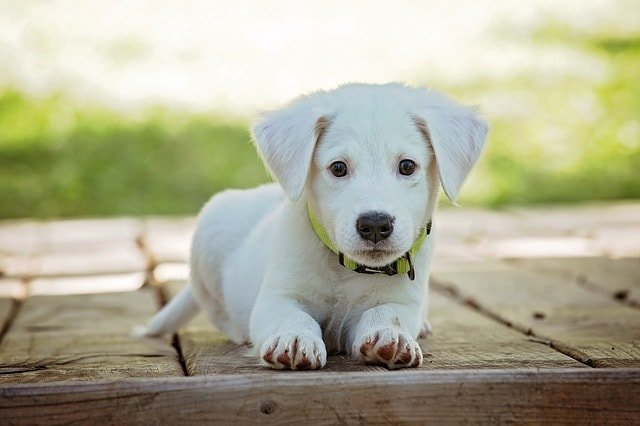 As your puppy starts to adapt to a new environment, or even when they start training and meet other puppies and humans, they may face fear and stress. This will activate neurological responses and cause your puppy to start breathing quickly.

Sometimes, the initial separation from the mother may also cause them stress. By removing them from an environment that they are used to, your puppies may start feeling stressed and thus breathe quickly.

In such situations above, you can be rest assured that your puppies do not have a medical problem. You can soothe their breathing by helping them to adjust to their new environment, slowly introducing your puppies to new situations.

Your puppy may have a respiratory disease

As mentioned earlier, there are three common respiratory diseases amongst puppies that may cause rapid breathing. Often, puppies will also experience chronic coughing.

If your puppy is suffering from dyspnea, you may observe that their nostrils may flare when they breathe, or their chest and belly will start to move more than usual. They may also breathe with their mouths opens and their elbows sticking out of their bodies.

Rapid breathing is also known as tachypnea, and some common symptoms include faster rate of breathing, shallow breaths or closed or partially opened mouth. Tachypnea may be tied to different lung-related diseases, such as asthma or pulmonary edema.

Other diseases such as anemia, heart failure and heartworms (Symptoms of Worms in Dogs)  can also cause respiratory problems. Some of these diseases are caused by an obstruction of the air passageway between the nose and the lungs of the puppies.

Another cause may also be the inflammation of their stomach. A lot of puppies develop swollen bellies due to excessive air, eating too quickly or even puppy worms. Hence, if your puppy starts breathing quickly due to puppy worms, you can bring them down to a vet for a quick deworming treatment. You can prevent excessive air by teaching your puppy to eat at a correct pace as well.

For most puppies, panting is a normal way to cool themselves down and is usually fast breathing with shallow breaths. Their mouths should also be widely opened and they have an extended tongue.

However, if you notice anything abnormal about your puppies breathing habits that does not involve sleep or cooling down from an exercise, you should schedule a visit to your local vet and have let your puppy go through a check-up.

We recently tried Tidy Cats at home and I thought…